A quiet offering on the European economic data docket is likely to see traders looking ahead to focus on minutes from January’s FOMC meeting. The policy statement and press conference unveiled after that gathering marked a notable dovish shift in official rhetoric, endorsing the late-2018 drop in priced-in rate hike bets. Markets expected two hikes as of November. By the turn of the year they foresaw none.

A darkening outlook for global growth seemed to be the culprit behind this adjustment. Indeed, the expected policy path implied in Fed Funds futures dropped alongside the bellwether S&P 500 stock index, a benchmark for the broad-based markets’ assessment of global economic prospects. Interestingly, the US Dollar held firm as rates-based support unraveled, underpinned by safety-seeking capital flows.

This might foreshadow a somewhat counter-intuitive response if the Minutes document echoes officials’ newly defensive disposition. With traders now seemingly convinced that rate hikes are off the menu through 2019, there might be relatively little room for further dovish re-pricing to weigh on the Greenback. If the central bank’s worried tone stokes slowdown fears however, haven demand might nudge it upward.

The British Pound is waiting with baited breath after yesterday’s spirited rally as UK Prime Minister Theresa May prepares to meet with European Commission President Jean-Claude Junker. London is reportedly looking for a “significant” meeting that breaks ground on resolving the so-called “Irish backstop” hurdle to a Brexit deal. Mr Junker was more circumspect, saying he isn’t expecting any new developments.

YEN DOWN IN RISK-ON APAC TRADE, NZD DOWN AFTER DAIRY AUCTION

The Japanese Yen faced a familiar headwind as most Asia Pacific stock exchanges rose, driving underperformance against the standby anti-risk currency’s G10 FX counterparts. The typically sentiment-sensitive New Zealand Dollar also fell however, diverging from the risk on/off narrative. The average price of milk powder fell for the first time in three months at auction, which may have helped drive selling.

What are we trading? See the DailyFX team’stop trade ideas for 2019 and find out! 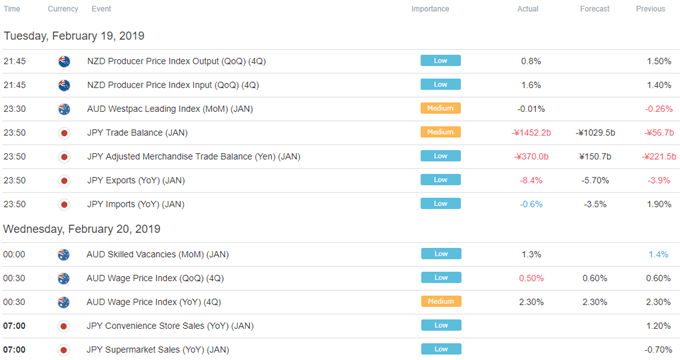