The sentiment-linked Australian and New Zealand Dollars are soaring at the expense of the anti-risk Japanese Yen and haven-linked US Dollar after the UK Exit Poll projected a larger-than-expected majority for Boris Johnson’s Conservative Party. Against an average of its major counterparts, the British Pound is hitting levels last seen from its significant collapse after the Brexit Referendum in 2016.

Such a result will make it easier for Johnson to pass his Brexit deal by the end of January. That helps reduce uncertainty over the future of EU-UK negotiations relative to a hung Parliament outcome. Just before this exit poll crossed the wires, US President Donald Trump signed off on a trade deal with China to avert raising tariffs on each other over the weekend.

These events combined helped induce a strong “risk-on” tilt in markets. According to the details of the trade accord, the United States would slash currently-imposed tariffs by about 50 percent. In exchange, China promised items such as agricultural good purchases and improved protection on intellectual property. Anti-fiat gold prices declined as US government bond yields rallied.

Actual results of the UK General Election will slowly trickle in during the coming hours. The British Pound could have more room to rally if confirmation of a UK Conservative majority is achieved. S&P 500 futures are pointing noticeably higher heading into Friday’s Asia Pacific trading session, pointing to gains in regional bourses. The focus for foreign exchange markets will thus likely be on the Nikkei 225, ASX 200 and Shanghai Composite. The AUD and NZD could have room to extend gains as JPY and USD decline.

The US Dollar has managed to clock in cautious gain against the Japanese Yen, but USD/JPY is struggling to breach the key psychological barrier between 109.49 to 109.72. Negative RSI divergence shows fading upside momentum which can at times precede a turn lower. That would place the focus on key support which is a range between 108.23 to 108.55.

Charts of the Day – USD/JPY 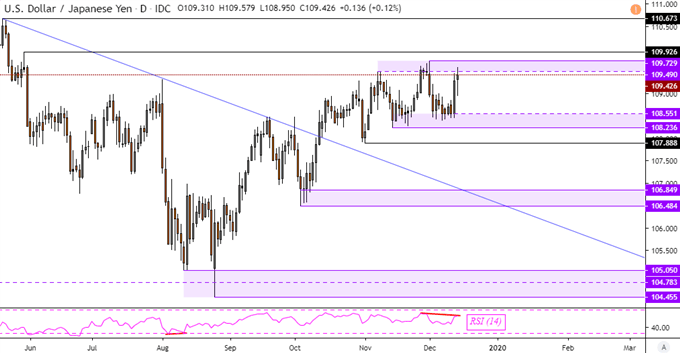 Meanwhile, the Australian Dollar has surged above key falling resistance from the end of last year. AUD/USD is attempting to confirm a daily close above the key psychological barrier between 0.6894 to 0.6929. Taking this area out opens the door to reversing the dominant downtrend that has prevailed for this year. Otherwise, a turn lower places the focus on support at 0.6862. 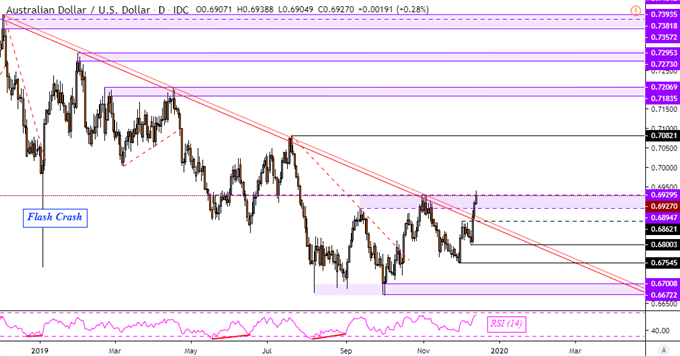 You might be interested in
What Do Other Traders' Buy/Sell Bets Say About Price Trends?
Register for webinar
Join now
Webinar has ended