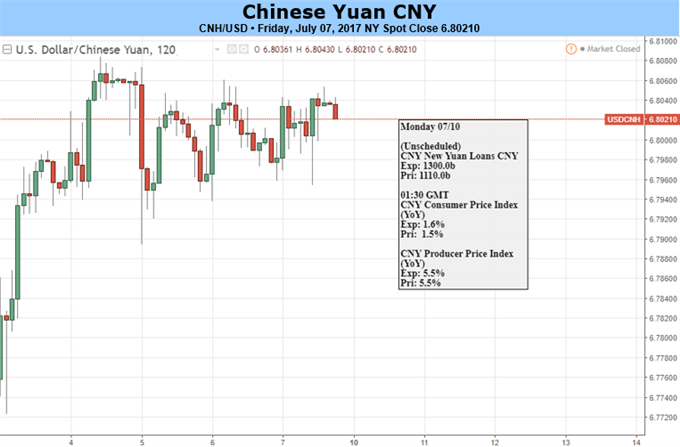 The Chinese Yuan retraced against the U.S. Dollar this week, but remained within an upward channel (downward for the USD/CNH). Both the July FOMC minutes and the Non-Farm Payrolls report added mixed moves to Dollar pairs, including the USD/CNH; neither was able to generate enough momentum to lead a major breakout in the USD/CNH. Looking forward, a heavy economic calendar has the Yuan at risk from home: Consumer Price Index (CPI), New Yuan Loans as well as China’s exports and imports will be top indicators to watch.

Maintaining a good trade relationship with its major counterparts has become one of the challenges that China faces, amid the rise of protectionism seen worldwide. Avoiding conflicts with trade partners, especially the U.S., has been set as a priority by China. The risk was curbed after Trump-Xi’s meeting, but this does not mean it has been fully eased, as the trade deal between China and the U.S. for the coming periods is still unknown. China’s Deputy Minister of Finance Zhu Guangyao told at a US-China business leaders’ dialogue meeting in late June that “the two countries are working on trade practices following the 100-day plan”. On July 6th, he told at a press briefing that promoting free trade will be one of the targets for China at the G20 leaders meeting.

In terms of China’s exports in June, Bloomberg forecasts that the gauge will expand at a faster pace of 9.0% from 8.7% in May. More importantly, investors will want to take a look at the breakdown of the gauge by country, which will provide more clues on China’s trade conditions with its major counterparts. Also, remember China will release the second quarter GDP in two weeks. As a component to the GDP, June trade figures could impact the final estimation of the economic growth in the second quarter.

Gauges that can influence China’s monetary policy are worth to watch as well. China’s Consumer Price Index is expected to rise 1.6% in June from 1.5% in the month prior, though both figures are still distant from the target 3%. With a relatively low inflation, the PBOC is less likely to increase benchmark rates. On the other hand, the regulator is neither likely to cut rates despite of the economic slowdown. In the 2017 China Financial Stability Report released by the PBOC this week, the regulator said that the risk of housing price bubbles remained elevated in some regions and the home loans’ proportion of total new yuan loans was still high. In May, home loans have taken up over 50% of the total loans. Before the ratio drops to a desired level, the PBOC will mostly likely keep monetary policy neutral, which is tighter than last year.