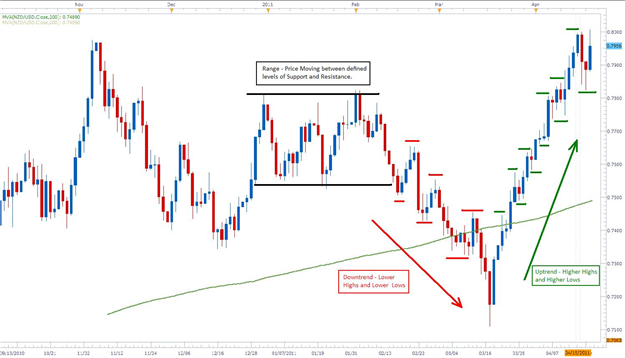 The Challenge of Identifying a Change in Trend

One of the biggest concerns facing a trader is how to determine when a currency pair has changed the direction of its trend. In other words, if the pair had been moving to the downside, how do we “know” when that bearish trend has ended and the pair has begun a bullish move to the upside? The answer is that we can never “know” for certain.

But there are some indications, some tell-tale signs that we can use to create a trading edge that can put us on track to taking higher probability trades.

For our example, let’s take a look at the historical Daily chart of the NZDUSD below…

This is an excellent chart to use as it shows a range along with a downtrend and an uptrend. Let’s take a look at the range first.

When a market is ranging it is trading between two defined levels of http://www.dailyfx.com/forex/education/trading_tips/daily_trading_lesson/2011/07/06/Support_and_Resistance_Part_1.html

As price action finds a support level that it cannot penetrate, price then begins a bullish move to the upside. This move is reflected on the chart by the green lines which depict the higher highs and higher lows that the pair is making as price moves to the upside.

OK…so when does the trend change occur? The answer to that question will vary from trader to trader depending primarily on their trading style. Since no one possesses that much sought after crystal ball that predicts the future, no one knows for certain where the ultimate bottom is in a downtrend or the ultimate top is in an uptrend. (Ideally, in my opinion as a longer term trader, these trend changes are best seen on longer term charts such as a Daily time frame.)

Bottom line: There is no black and white answer to the question.

However, here are some of the tell-tale clues that you can use to interpret price action and how you might trade the pair.

Looking at the chart, as the pair begins to move to the upside and the higher highs and higher lows (green lines) begin to take out the levels of resistance (red lines) and continue moving up, that is an indication that the strength of the move may continue its bullish course. The higher that price moves and the more levels of resistance it takes out, the stronger the move is. The opposite would be true in a downtrend.

Keep in mind that when these transitions from a downtrend to an uptrend or range to trend are occurring, they may not immediately be discernible on a chart. When a pair first begins to move to the upside or downside it may in fact represent a change in direction or it may simply be a retracement. It will take a bit of time for these moves to become evident on the charts. We want to be cautious and let the move develop before we commit to an entry.

As in other areas of trading, the qualities of patience and discipline will serve a trader well.