Most Read: NFP and Forex: What is NFP and How to Trade It?

Yesterday's risk-averse sentiment carried over into today's trading session. Following the rebalancing flows from last quarter, investors have refocused their attention on the fundamentals of the economy, where the overall outlook for risk assets remains bleak. Unabated inflation levels are putting upward pressure on interest rates while underpinning the strength of the US dollar.

For the second day in a row, U.S. Treasury yields rose for both the short- and long-term tenors. The two-year yield, which is the most sensitive to monetary policy shifts, rose to 4.24%, while the 10-year note jumped to 3.82%. While the Atlanta Fed president said today that he sees rates at 4.0-4.5% by the end of the year, Minneapolis Fed President Kashkari mentioned that cracks may be seen in financial markets as the central bank transitions to a higher interest rate regime.

The comments raised doubts about financial stability and a global recession induced by tighter monetary policy. Earlier in the week, the health of Switzerland's second largest bank, Credit Suisse, was called into question amid a weaker profile compared to its European investment banking peers. Today, the IMF said the risks of a worldwide recession are on the rise and countries accounting for a third of global GDP are expected to have two consecutive quarters of decline, either this year or the next.

In this uncertain environment, the beneficiary continues to be the king US dollar as investors seek safe-haven assets, undermining demand for equities.

At the close, the Dow and S&P 500 lost 1.15% and 1.03%, respectively, despite weekly jobless claims hitting the highest level since the last week of August. And while there was some consolidation ahead of tomorrow's employment numbers, ten of the eleven S&P sectors posted declines. News that General Electric (GE), in the industrial sector, is laying off 20% of its onshore wind energy workforce kept sentiment depressed.

On the other hand, the energy sector was the only component that advanced. Crude oil prices are near a three-week high after OPEC+ decided to cut supply by 2 million bpd based on quotas. Companies such as Chevron posted gains driven by rumors that the U.S. administration may consider lifting sanctions that would allow them to pump oil in Venezuela to ease fuel price pressures amid the OPEC+ decision.

Finally, on the tech front, the Nasdaq 100 also posted losses. At the close, the benchmark was down 0.76%. News that Google introduced its first smartwatch and new phone versions had little effect on the index.

From a technical standpoint, despite the S&P 500 opening lower, the bulls attempted to pierce the key resistance zone of 3805-3807, where the 38.2% Fibonacci level converges. To the bears' advantage, the bulls were unsuccessful as some consolidation was seen ahead of tomorrow's economic data release. Fundamentals, risk off sentiment and moving averages seem to point to a continuation of the downtrend over the medium term, absent a significant shift in market dynamics. Keep an eye on 3733 as it is a key support level. If this area is breached, we can’t rule out a move towards 3660, a previous resistance level. 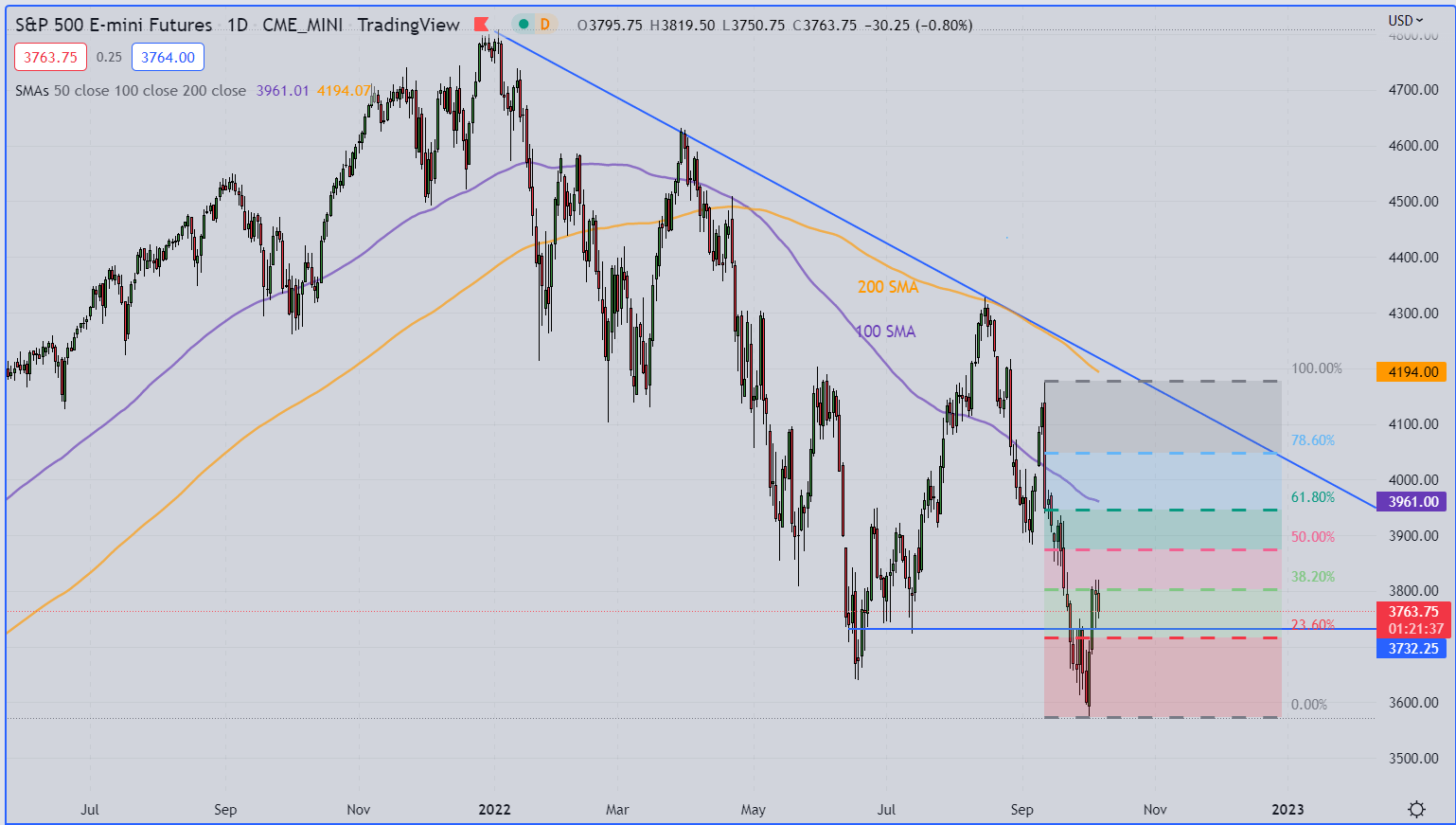 Looking ahead, tomorrow's September NFP data will be closely watched. As a critical indicator of the Fed's monetary policy and, by extension, the dollar's strength, investors acutely monitor this number. Markets are expecting an increase of 265,000 jobs, down from 315,000 in August.