Risk Aversion Carries Over to New Week, Will it Grow Beyond US and Turkey?

Risk Trends Carry Over Into a New Week

We closed out this past week with a shock of volatility for the global financial markets. The United States' escalation of tariffs on Turkey were having a clear impact on the country's exchange rate and assets which in turn was registered as contagion risk for those foreign investors witnessing the pressure. Rather than seeing the issue de-escalate over the weekend to cap the fallout to the world, officials in both countries stood their ground; and capital markets felt the impact with the start of the new week Monday. Yet, as much as the situation remains unresolved, there was an easing of intensity for those markets further away from the source of concerns. The most overt contagion was the spillover to related emerging markets. The EEM Emerging Market ETF gapped lower Monday morning - though is still shy of its 20 percent drop from highs which would pronounce a technical 'bear market'. That said, sharp moves from the EM currencies illustrated little of the scant reservation. In particular, the South African Rand and Indian Rupee suffered key moves - extreme volatility and a record low respectively - but there was tension registered in other key markets. The Mexican Peso, Russian Ruble and Korean Won were all facing related pressure. These countries are not directly related to their peer's troubles, but the belligerence of the United States and a more suspicious global investor class can succumb to more systemic issues. 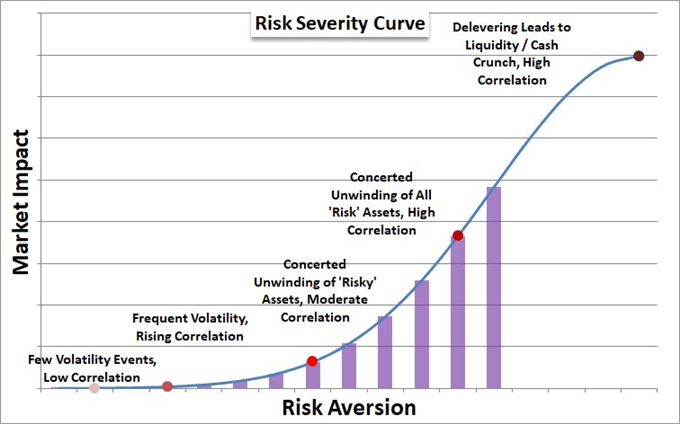 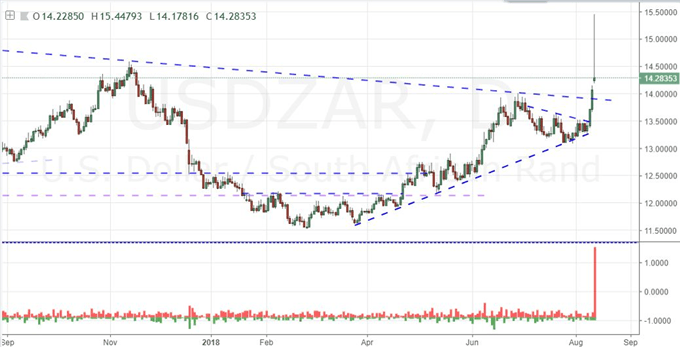 There is More Out There Than Just Exposure to Turkey

After the US close, headlines reported that John Bolton met with Tukey's Ambassador to the United States. That may signal forthcoming relief from the financial pressures amplified between the two countries. That said, these are not the only risks to the financial peace. In sanctions alone, the US has also recently announced penalties against the Russia and Iran which carry significant diplomatic implications if not the same direct economic consequences. And then there is the now-mundane trade war that continues to build momentum. While there are global elements on this front (the US-led metals tariffs), the pressure remains nothing short of economically-overwhelming between the United States. With USDCNH hitting a new high close through this past session, traders should have been served a reminder to keep a closer eye on the run of data that is due - retail sales, industrial production, jobs survey and fixed assets - along with the foreign fixed investment figure that has no scheduled date but is a critical measure for trade wars. And beyond this risks, we still have the systemic issues that have thus far been overlooked by convenient complacency: the extremes and turn of monetary policy; fading economic activity and the explosion of leverage over the past years. This should earn a close evaluation of traditional risks proxies like equity indices, the Japanese yen and gold. It should also prompt a closer evaluation of the less familiar benchmarks like EURUSD.

On many levels, EURUSD looks like a well-coifed trading opportunity. From the technical picture alone, the world's most liquid currency pair looks to be one of the most blatant patterns as well. With last week's clean and pointed drop below 1.1500, we were delivered a clear 'neckline' break on a head-and-shoulders pattern that was approximately 18 months in the making. That support further coincided with the mid-point for the range established from the 2016 low to present. Looking to the bigger picture, this progress seems to further reinforce the bear trend that has developed through years and was most recently confirmed with the pair's hold and retreat from 1.2500. Fundamentally, circumstances seem to support the slide from a basic 'risk' evaluation with the Dollar's traditional safe haven value and the greater exposure Europe's financial system has to Turkish and Iranian markets. Yet, where the pressure leveraged by the Trump administration has clear ramifications for Europe; the Dollar is not immune to the growing risk of blowback from sanctions and tariffs so widely dispersed. Meanwhile, localized risks should also be accounted for. For the US, data Tuesday (2Q household debt and credit along with small business confidence) will matter less than the constant vigilance market participants should maintain on President Trump's twitter feed - for updates like furthering his open ruminations on the level of the currency. For the Euro, data is similarly important economically (investor sentiment and key regional 2Q GDP readings), but Italy's regular pressure on the monetary union remains underpriced. 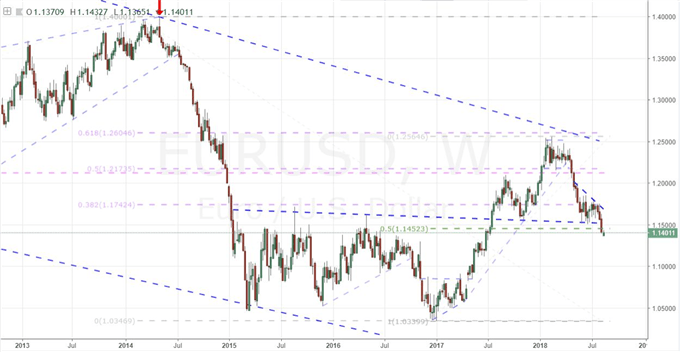 While the dominant headlines will always change with time and circumstance, those persistent matters should be a constant valuation metric for relevant currencies and assets. The British Pound continues showed a little relief from its remarkably consistent slide against the US Dollar; but on an equally-weighted basis, the past week has turned the currency to congestion. Brexit has proven the most consistent driver and anchor to the Sterling over the past months, and that is where we should continue to look when we want a picture of trend and momentum. Over the next 48 hours, we are due UK jobless claims and inflation; but it may very well be technical discussions between the British and European negotiators Thursday and Friday which may steal the market's attention. In commodities, we find another break from the common drive of risk aversion. Crude oil - which absolutely has a 'risk' connection through its economic necessity - held its well-worn channel support yet again Monday with a variety of 'supply/demand' headlines to draw from yet again. It is gold that seems to most defy its familiar role. While risk aversion has throttled favored capital gains and high yield assets while lifting havens, the precious metal has continued to dive with the sharpest single-day drop in two months to an 18 month low. I continue to consider this an ideally positioned asset for financial crisis, but while the Dollar advances and US equities hold fast, it can maintain pressure. We discuss all of this and more in today's Trading Video.