US Dollar weakness and a general push toward counter-cyclical perceived haven assets have seen the Japanese Yen break through an important barrier against the greenback.

However, Yen bulls have yet to nail down their gains and they may yet lose them if they can’t do so this month. At the start of August, USD/JPY slipped below an important medium-term monthly-chart uptrend line which had previously held since May 2016. It didn’t remain below it for the entire month but did close out underneath, where, so far, it remains. 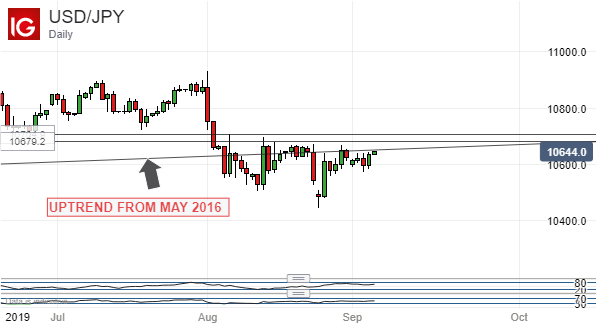 Another monthly close below this line would make matters a lot worse for Dollar bulls, and, although it’s still early in September, they seem to be showing some fight.

Their first order of business must be to recapture near-term resistance at 106.79. That marked the intraday peak of August 15 and can be seen as the bottom of a narrow range of daily-chart resistance which has the peak of August 6 (107.04) as its top.

As you can see from the chart above, the bulls would put that downtrend line behind them once again if they can recapture that resistance zone. They’d also go some way to making back the very sharp falls seen at the end of July as the Dollar wilted broadly on US-China trade war worries.

However, failure to recapture those levels soon could see the Yen back in the ascendant. That would bring August’s notable lows in the 104.80 region back into swift focus.

Heightened Brexit tensions continue to rule the British Pound’s fortunes against most of its rivals, the Japanese Yen being no exception.

GBP/JPY has made lows not seen since December 2016 in the past month but now seems to have settled into a broad range whose top is in the 130.38 region. This market is clearly in thrall to fundamental news flow rather than technical drivers at present, but the enduring nature of the cross’ downtrend is obvious enough.

Without any sign of Brexit clarity, it must be unlikely that forays above the range top can possibly last and a retest of the range lows looks highly probable over the next few days.