Japanese Yen Technical Analysis: USDJPY Bulls Have More To Do

The Japanese Yen is starting to weaken once more against the US Dollar after a period of relative strength.

At the end of July, USD/JPY slipped below the lower bound of an uptrend channel previously dominant since late March. There were some sound fundamental reasons for this technical breakdown. Ongoing worries about trade between the US and major partners- most obviously China- sapped risk appetite. Later, Turkey’s problems and fears of contagion to other emerging markets, and European banks, reduced it further. 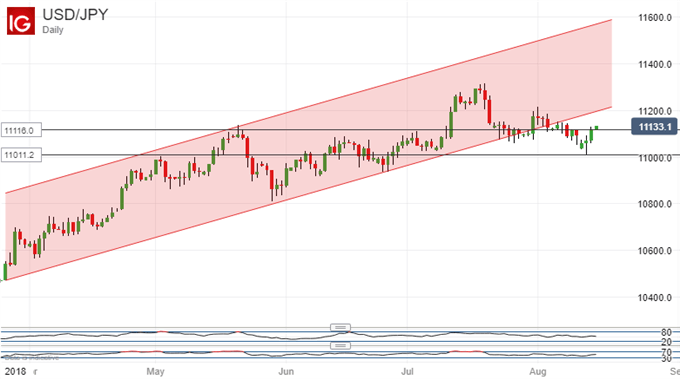 In this light, it is perhaps no wonder that the perceived haven of the Japanese Yen should have been popular. However, it’s equally little wonder that, in the absence of new, worrying headlines, the yawning interest rate differential in the Dollar’s favor should reassert itself. That’s what seems to be happening now from a fundamental perspective. Technically speaking, Dollar bulls have managed to nose above the 111.16 level, which was Tuesday’s daily close and, also the top of a near-term range in place for a week or so.

They will need to provide a few daily closes above that point to convince, however. After that, they could perhaps begin to think about the most recent significant top. That comes in at 112.14 and it was set on August 1. Significantly a foray back to those levels would see the old uptrend channel back in business.

Setbacks are likely to find a bit of support at 110.10. That was last Monday’s intraday low and as such serves as the former range base. USD/JPY probably also has near-term support at 111.15. That level is the first, 23.6% Fibonacci retracement of the rise up from the lows of March to August’s peaks.

The Dollar managed to recapture it this week. Below that, 38.2% retracement awaits, at 109.92, but that probably won’t face a near-term test.

The Australian Dollar meanwhile has suffered notable technical weakness in the past few days, and its fate against the Japanese Yen has been no exception to this. Indeed AUD/USD has broken below a broad trading range, which had previously endured since late February. Notably this wide band was anchored between the 38.2% and 50% retracements of the rise from June 2016 to the peaks of September last year. These come in at 86.05 and 83.42, respectively.

Unless Aussie bulls can reclaim at least that lower bound sustainably, then it looks as though 61.8% retracement at 79.18 will beckon