The S&P 500 is trading at resistance lines noted last week and could prove problematic as momentum is tepid. Fighting the tape, though, doesn’t hold a lot of appeal as these markets can be quite painful to short as the market bleeds higher.

But existing shorter-term minded longs may want to consider buttoning up trailing stops in the event of a set-back. As far as fresh longs are concerned, seeing a correction first could help set the table for an entry on a pullback or horizontal consolidation period.

On weakness it will be of interest as to how price action unfolds. A gradual decline similar to the one that took place in the latter half of last month would be viewed through a constructive lens as selling was mild. A sharp, sudden move, while may only prove to be short-lived, will still elevate the risk that a larger decline has begun.

It will take a bit of a dip to reach this point, but there is a trend-line running up from the March 4 low that could help act as support in the event the decline morphs into something more than a sideways consolidation pattern. 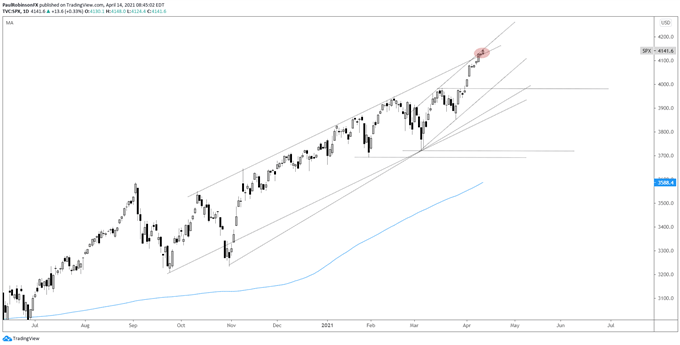 The Dow Jones is grinding higher as old-school stocks take a back seat to big tech. But still the trend is strong and not worthy from a risk/reward perspective to fight. On a pullback there is a slope under 33k to watch as potential support. 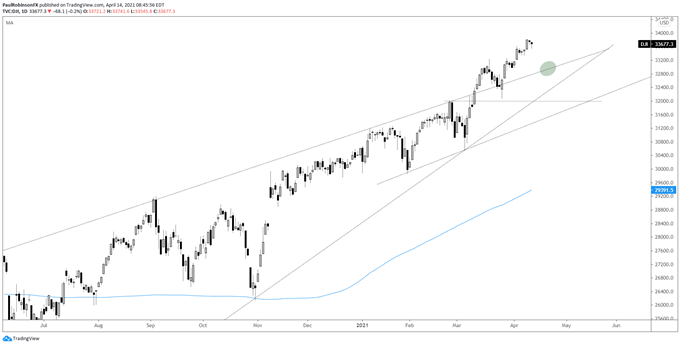 The Nasdaq 100 has burst back onto the scene, notching itself a new record high as big tech is back in favor. FANMAG (FB, AMZN, NFLX, MSFT, AAPL, GOOG) is a group back to record highs. TSLA is perking back up too despite being well off the old highs.

Not a lot of great techs to watch here on the NDX chart, but outlook similar – caution appears warranted on both sides of the tape depending on how you are positioned. 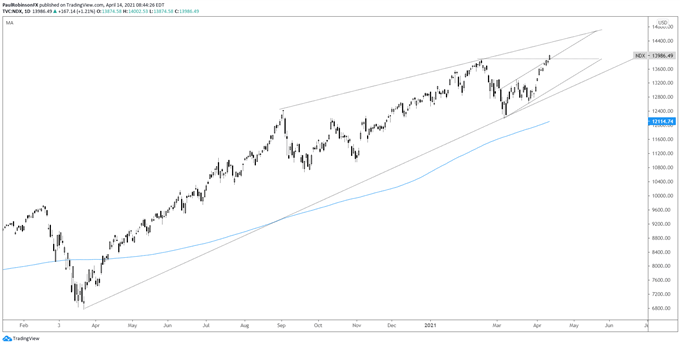