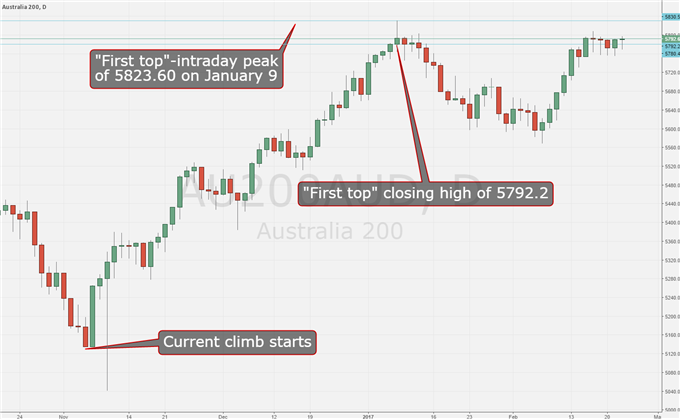 ASX 200 Technical Analysis: Must This Be A Double Top?

The ASX 200 equity index could be at a key juncture, at which the bulls’ resolve could be both tested and crucial.

The benchmark had been climbing nicely from November right up until the start of January. On the ninth of that month it topped out at 5823.60. It then retreated from that peak and, although it didn’t fall far, it has only girded itself to challenge that summit again in the past week or so. And so far it hasn’t managed to pass that peak.

If it fails again the high of January 9 will start to look a lot like a technical “double top” and become all the more formidable a barrier for that.

Indeed, a conclusive failure here could put longer-term strength in doubt, with support at December 9’s closing low of 5538.70 in focus below. Of course if that too were to fail then the entire rise from early November could be brought into question.

For the moment, however, the bulls seem to understand their positon and are trying to defend it. At the current 5796 mark the ASX is above the 5792.2 closing level on that peak day, January 9. But not by much. And it’s still well below that session’s intra-day top. Still, if the index can continue on to close around current levels consistently then the bulls may have proved their point.

But if not, then the prospect of a double top will threaten.

In the balance: the ASX 200’s torrid start to the year

What does the rest of the year’s first quarter have in store? The DailyFX analysts’ forecasts are here.