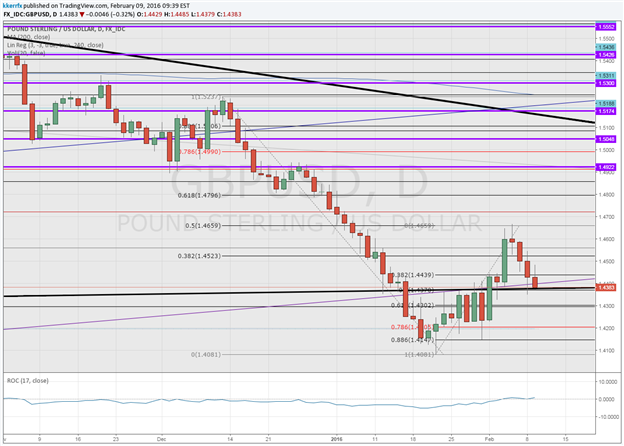 GBP/USD continues to oscillate around 1.4400. As I wrote a couple of weeks back, I thought a clear break of that level would open the door to a more serious correction higher. We rather got that with last week’s move to 1.4670, which interestingly coincided with a convergence the 50% retracement of the December – January decline and the fifth square root relationship of last month’s low. Since then the pound has come under fairly steady pressure, but still hasn’t really broken anything of significance on the downside. Overall, we are pretty much back where we started and trying to figure out if the move higher in GBP/USD has just been a bounce from oversold extremes or the start of a more drawn out recovery?

The latter half of this week looks vital in determining an answer as a several key timing relationships will be converging then. If the broader downtrend is going to try to reassert itself then that is probably the right time for it to do so and any remaining strength should peter out by then. Continued strength past Monday of next week, on the other hand, would invalidate this interpretation and likely signal this move higher in Cable has more room to run. Key resistance on the upside obviously looks to be last week’s high near 1.4670, but time is probably the more important variable here so a move through it before heading lower can’t be ruled out either. A confluence of Gann and Fibonacci levels around 1.4300 suggest that zone is an important downside pivot and only aggressive weakness below there would warn that the broader downtrend has resumed ahead of schedule.