The USD/JPY is edging lower following the FOMC rate decision, with the pair trading below the 105 handle at the time of writing. The pair has seen erratic movements as of late on different reports of possible fiscal stimulus in Japan, believed to be in the region of ¥28 Trillion, but details are still lacking.

This puts the focus firmly on the next huge event risk on the docket which is the BoJ Monetary Policy Decision.

In what could prove to be one of the main events of the year, the BoJ is set to announce their July Monetary Policy Decision.

Following Japanese Prime Minister Abe winning a majority in the Upper House elections earlier this month, the PM pledged to compile a stimulus package to support the economy. Yesterday, Abe announced plans for a ¥28 Trillion fiscal stimulus plans, but the details are still lacking (and parliamentary approval).

This firmly puts the focus on the BoJ decision on the backdrop of monetary policy possibly acting together with fiscal stimulus to support growth in the Japanese economy.

BoJ governor Kuroda is facing intense expectations for more easing in this meeting. Possible actions by the bank could be an increase in purchases of ETFs and/or deeper cut in the negative interest rate- but Kuroda has a tendency to surprise.

This could go both ways as the bank might hold back on further easing before fiscal stimulus is actually set in motion or send a “Bazooka” with new extreme measures (with the term “helicopter money” being thrown around lately) which could go against the prevailing narrative saying that the BOJ is reaching their limits. With that said, the real risk might be if the BoJ falls short of expectations. 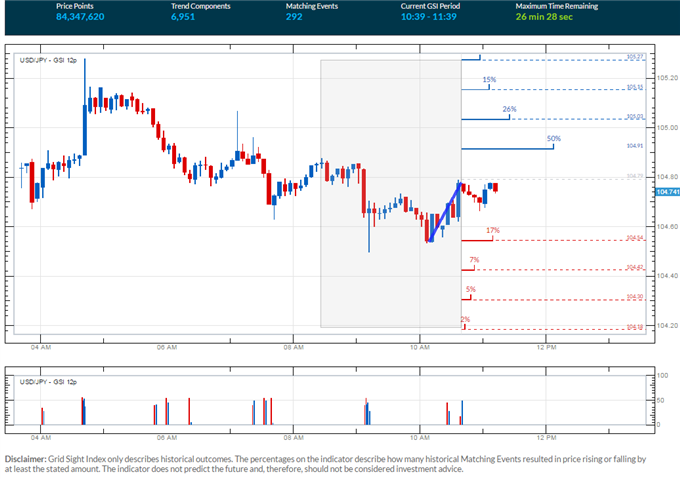 The USD/JPY is approaching possible resistance at 105.00 (see chart below), with GSI calculating higher percentage of past movement to the upside. The GSI indicator above calculates the distribution of past event outcomes given certain momentum patterns, and can give you a look at the market in a way that's never been possible before, analyzing millions of historical prices in real time. By matching events in the past, GSI describes how often the price moved in a certain direction.

We use volatility measures as a way to better fit our strategy to market conditions. USD/JPY 1-week implied volatility is at its highest level in 7-and-a-half years on the backdrop of this risk event.

Suffice it to say, the options market is pricing huge swings here. Short term technicals might hold until the event, but trend oriented plays will likely be appropriate ahead. 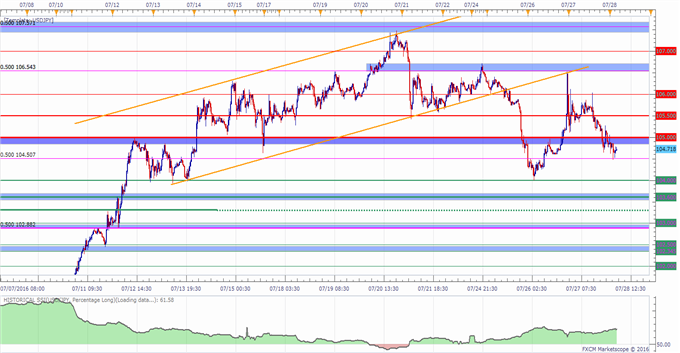 The USD/JPY is nudging lower following the FOMC rate decision. The pair has seen a slight pause at the 104.50 level at the moment. Further levels of support on a move lower might be the 104 handle and a zone around the 103.60 level, followed by 103.30 and the 103 round figure.

Levels of interest on a move higher could be the round 00s and 50s with what appears to be a key area of resistance above 106.50 and another area higher around the 107.575 level.

Meanwhile, the DailyFX Speculative Sentiment Index (SSI) is showing that about 61.5% of traders are long the USD/JPY at the time of writing. The SSI is mainly used as a contrarian indicator, implying weakness ahead.