Yesterday, Rishi Sunak announced a £15bn relief package for low income/vulnerable households in an attempt to ease the burden of escalating inflation. The package will be partially funded by a new temporary windfall tax applied to energy companies as they report stellar profits due to rising fuel costs.

The fiscal support will certainly be welcomed by Bank of England (BoE) officials who are tasked with the unenviable task of hiking rates into a slowing growth environment to get a hold on inflation which last printed at 9.1%. By design, fiscal and monetary policies operate independently from one another but can achieve desirable results when policy outcomes are aligned. In this case, the fiscal support eases the pain caused by higher interest rates for low-income earners, allowing the BoE to continue its fight against inflation.

The reaction to Sunak’s stimulus was rather muted as the government’s plans were communicated well in advance and had been worked into the recent bullish price action in the build-up. The fundamental outlook for the pound is not appealing as March GDP data revealed a contraction month on month, inflation is expected to surpass double digits and the likelihood of the BoE failing to keep pace with the market’s expectations on rate hikes, leaves the pound vulnerable.

Today’s price action thus far (London AM session) has been rather telling. After yesterday’s good news of fiscal stimulus, it would appear that the good news has faded as GBP/USD trades lower after a rejection of the zone of resistance at 1.2670. If we are to see a reversal of the short-term bull trend, 1.2400 appears as the first level of support with 1.2250 thereafter.

Should bullish momentum build form here, that underside of the zone of resistance (1.2670) comes back into focus with the psychological level and upper side of the resistance zone at 1.2700 warrants attention. The average true range indicator (measure of volatility) has dipped but remains elevated overall, suggesting caution and prudent risk management. 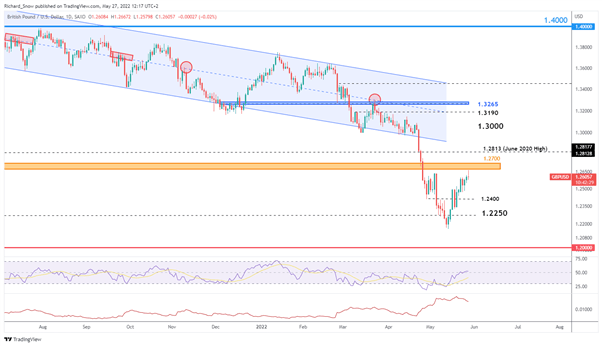 Main Risk Events for the Weak Ahead

Later today we have US PCE data (Fed’s preferred measure of inflation) on hand and even if we see a second successive lower monthly print, the data is extremely unlikely to have any effect on the path of rate hikes. Next week we have ISM PMI data which will be monitored closely for the services print (largest sector in the US economy) for signs of worsening economic conditions. We also have UK house price index data and mortgage lending data next week which could give some insight on the property sector as interest rates are likely to reduce the number of new mortgages. Lastly, the US non-farm payroll data is due to show a positive print with 350k jobs added.