If recent price moves are any indication, the Nasdaq 100 has reclaimed its throne as the leader of US equity price action as fast growing technology stocks outpace value stocks that had helped prop up the Dow Jones in recent months. The growth-to-value rotation had become known as the reflation trade and was a widely-watched stock investment trend in the first five months of the year, but has recently lost much of its steam. The shifting landscape is perhaps most evident in the Nasdaq 100 to Dow Jones ratio, a rough growth to value barometer. 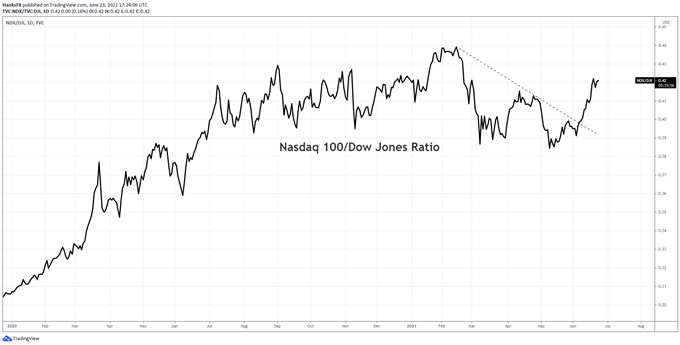 The ratio, which had been trending lower since February, tagged its highest level since February 22 this week and snapped a series of lower highs and lower lows that had materialized over the last four months in the process. While technical analysis on a ratio of two indices has limited usefulness, it does help to highlight the changing relationship which can be confirmed by looking at the Nasdaq 100 and Dow Jones price charts individually.

In the case of the Nasdaq 100, the tech-heavy index has established a series of fresh all-time highs after breaking above resistance early this week. With few barriers to the topside, the Nasdaq 100 may look to continue its gradual climb higher in the weeks ahead – as long as risk aversion remains at bay - and might utilize prior resistance as support going forward.

The most notable nearby support is likely derived from the rising trendline drawn off the May 19 swing low. The level coincides with various intraday lows since its inception which suggests it has helped guide the Nasdaq 100 higher. Thus, a breach of the level could see losses accelerate toward secondary support.

The Dow Jones, meanwhile, has forfeited its leadership position after a few months at the top and has solidified the forfeiture by surrendering a key trendline from March 2020. The break likely allowed losses to accelerate and the Industrial Average may encounter resistance at the level going forward. As a result, the Dow Jones may grasp for direction if the barrier proves insurmountable in the summer trading conditions which may allow the Nasdaq 100 to Dow Jones ratio to expand further.

It would seem then, that recent price action and monetary policy moves have dealt a serious blow to the reflation trade – at least for now. Should runaway inflation concerns reemerge, the Dow and industrial stocks might find themselves in a position of strength yet again but that seems unlikely in the near future. Thus, equity traders might expect tech stocks to regain their appeal in the coming weeks. In the meantime, follow @PeterHanksFX on Twitter for updates and analysis.