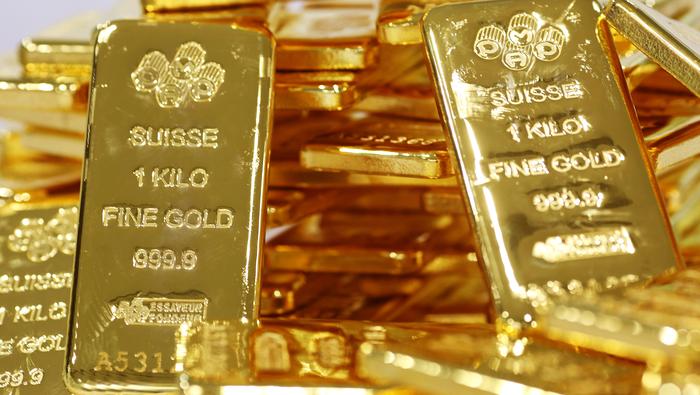 After a brief period of relative calm in the bond market, yields have once again seen a sharp rise in recent sessions with yesterday seeing the US 10YR rising to fresh cycle highs of 1.77%. This had come to the detriment of gold prices, which had also felt the weight of a firmer USD to test its monthly low at 1676. The latest motivation behind the move higher in US yields stems from the Biden administration talking up another stimulus package, this time an infrastructure bill said to be in the region of USD 3trillion. What’s more, this infrastructure bill is expected to be in part-financed by tax increases of which most details have already been leaked. However, the most pertinent increase will be the corporate rate rising to 28% from 21%, effectively unwinding Trump’s tax cut. That said, while risk sentiment may remain buoyant, the talk of tax increases and yields continuing to rise sharply does provide a cause for concern for risk sentiment. 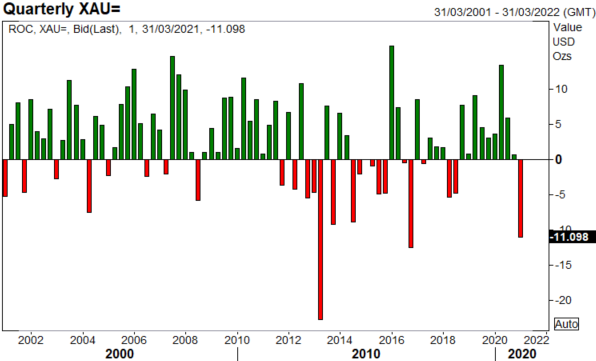 Gold Outlook Remains Weak With Real Yields on the Rise

Taking a closer look at gold, the chart above shows that the precious metal is set to post its worst quarter since December 2016 having dropped over 11% thus far. Moving forward, there is very little going for gold as real yields continue its march higher, while the dollar’s close above the 200DMA keeps risks tilted to the upside, therefore capping bounces in the precious metal. As I have said previously, the technical outlook remains weak for gold, as long as the price remains below resistance at 1760-65, Meanwhile on the downside, the aforementioned 1676 level has stemmed losses for now, although, failure to hold opens to the door towards 1596 (23.6% Fib retracement). 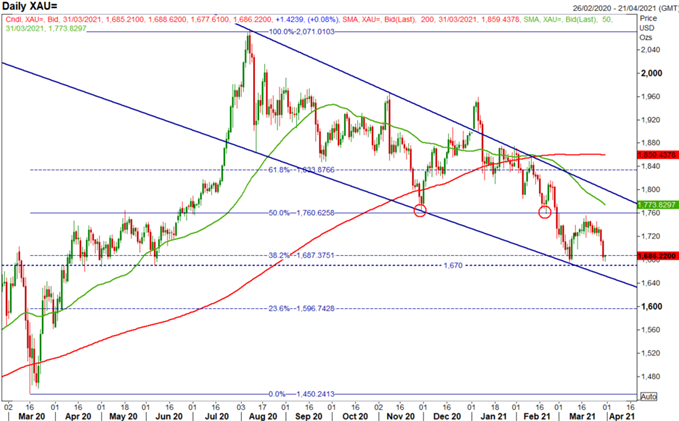 Silver has also gotten off to a weak start to the year, posting its first quarterly drop in a year, falling over 8%. In recent sessions, silver has made a key technical break, having closed below its 200DMA for the first time since May. In turn, this is likely to keep the pressure on silver with the next notable support seen at 22.86 (38.2% Fib retracement) and 22.00 below. That said, unlike gold, there are slightly more reasons to be less downbeat on silver, the main reason being that silver is a substantial industrial demand component, therefore with the US looking towards a large infrastructure bill, this could continue to see silver outperform gold. 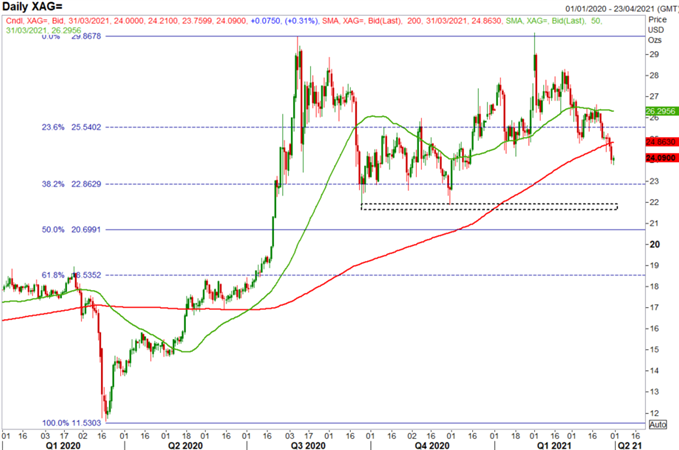 Silver is a Crowded Trade in the Retail Space

Elsewhere, taking a look at IG’s retail positioning, silver is a crowded trade with net longs at 92%. As such, given that we tend to take a contrarian view to crowd sentiment, silver prices may continue to extend lower. 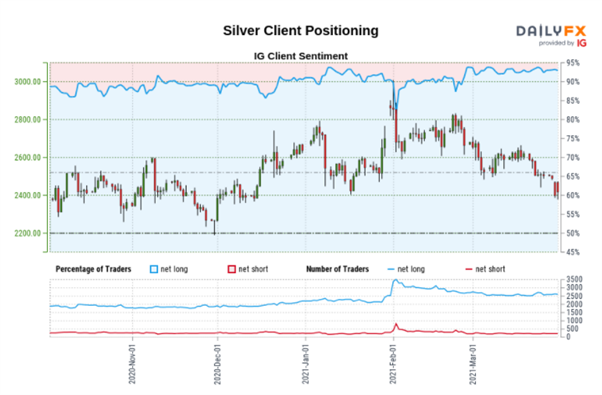