WTI crude oil prices fell for a fourth day despite a weaker US Dollar as traders leaned defensive ahead of an OPEC+ meeting scheduled on Thursday. Oil traders have long been anticipating a 3-6 months delay in planned production hikes by the coalition, rendering oil prices vulnerable to unwinding trades should OPEC+ fail to deliver a plan to rein output.

A much larger-than-expected rise in US crude stockpiles, according to data released by the American Petroleum Institute (API), further weighed on energy prices. The API reported a significant inventory rise of 4.146 million barrels in the week ending November 27th, versus an expectation of a 2.358-million-barrel drop.In the previous week, API reported a 3.8-million-barrel build in inventories.

The next EIAcrude oil inventory report will be released later today, with expectation of a 2.358-million-barrel decline. In view of a 4.146-million-barrel decline from the API report, the actual number from the EIA may deliver a surprise. Crude oil prices have displayed historic negative correlation with inventories (chart below). 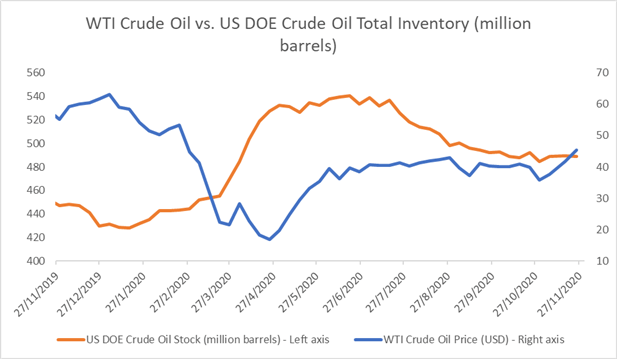 Recently, oil prices had a decent rally driven by vaccine optimism. The prospect of a faster removal of travel restrictions and of economic normalization, however, may not serve as sustainable drivers for oil prices without material improvements observed on the demand side. Large inventory builds over the past few weeks may underscore weakened energy demand into year-end due to pandemic-linked lockdown measures imposed around the globe.

According to data compiled by Flightrader24, the ascending trend of the global daily flight count appears to have reversed recently after registering an impressive rebound during the April-August period (chart below). The 7-day flight count average dropped to 129,008 on December 1st from recent peak of 155,543 observed on September 21st, marking a 17% decline. On a year-on-year basis, the recent daily flight count is25% below the same period last year, reflecting a tepid recovery in fuel demand. 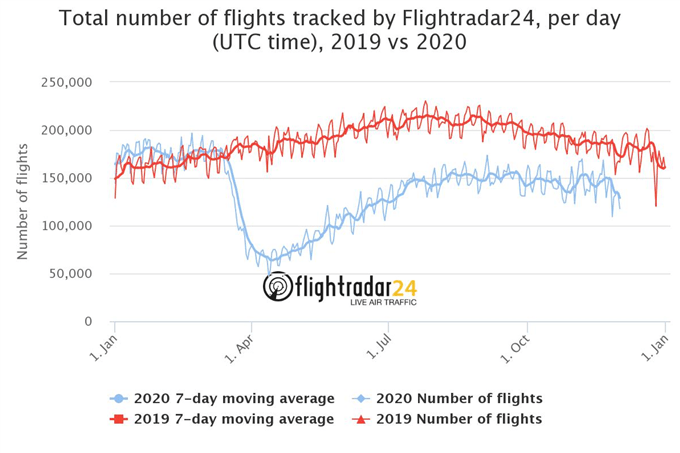 Technically, WTI has likely formed a bearish “AB=CD” pattern and since entered a technical correction. An immediate support level can be found at US$ 43.40 – the 23.6% Fibonacci retracement. Breaking this level may open the door for further losses with an eye on US$ 41.60. The RSI indicator has pulled back from overbought territory as price consolidates, pointing to more downside risk.