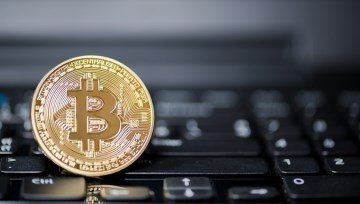 The cryptocurrency resurgence continued Tuesday as Bitcoin rocketed through $8,000 for the first time since July 31, 2018. Year-to-date, the coin is now up 111%. By comparison, the S&P 500 is up 13.25% in the same span. The rally comes amid the Consensus conference in New York, one of the most influential blockchain and digital assets events of the year where industry professionals gather to discuss a variety of issues facing the cryptocurrency world. This year’s conference convenes from May 13 to May 15.

Read about the correlation between weakening emerging market currencies and cryptocurrency strength here.

As the conference proceeds and the benefits of cryptocurrency are touted, Bitcoin recorded its highest intraday trading volume since November 20, 2018. At the same time, the digital asset posted its third largest single-day rally in 2019 at 12.11%. Beyond that, the daily return was the fourth largest since 2018. 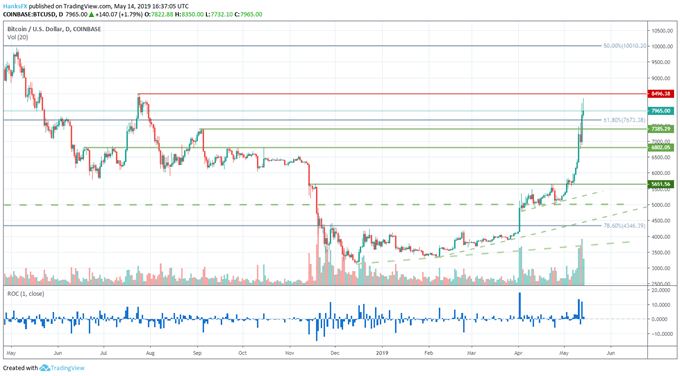 Price and volume data from Coinbase exchange via TradingView

On the back of the rally, Bitcoin must now negotiate a series of psychological levels at $8,000 and $8,500 – which also marks the digital currency’s July swing high. That said, nearby support at $7,385 and a plethora of optimistic media coverage could look to bolster the outlook for BTC in the short-term. Bitcoin’s high on Tuesday – around $8,360 – marks the highest price for the coin since July 25, 2018. 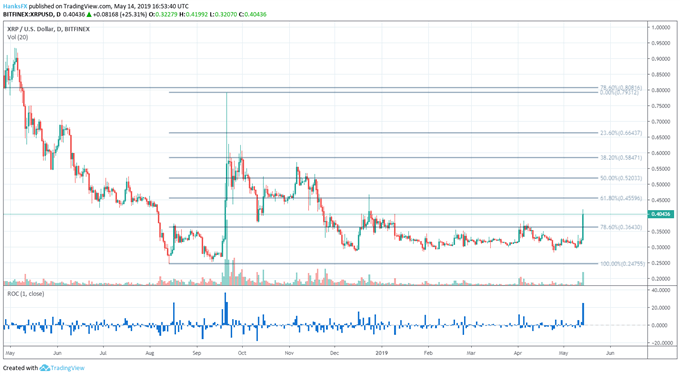 Price and volume data from Bitfinex exchange via TradingView

Although Bitcoin is in the midst of a formidable rally, XRP looks to be Tuesday’s star performer. The coin surged over 24% on news that the Coinbase cryptocurrency exchange would offer XRP trading to New York users. The move grants broader access to the coin which should serve to increase liquidity. At the time of this article’s publication, the coin is on pace for its largest single-day rally since September 21, 2018. Similarly, XRP recorded its highest volume trading day since November 25,2018 – with hours left for further exchange.

Tuesday’s rally also erased all losses for the digital asset in the year-to-date. Prior to the surge, XRP had shed roughly 15% of its value since the beginning of 2019. As the session progresses, the coin now boasts a YTD return of over 10%. The single-day swing displays the considerable volatility in the cryptocurrency market. That said, follow @PeterHanksFX on Twitter for further cryptocurrency analysis as the Consensus conference continues and the coin prices fluctuate.