As anticipated, the Australian Dollar was relatively restrained when the RBA June meeting minutes crossed the wires. Before the document was released, the Aussie was battered as risk appetite soured on renewed threats of a trade war. There, US President Donald Trump instructed the US Trade Representative’s office to find $200 billion in Chinese goods for potential tariffs.

Heading into the release, the Aussie attempted to recover as the US Dollar fell. However, its ascent seemed to have stalled as the minutes were released. In the details of the document, the Reserve Bank of Australia said that wage pressures are building and that recent data is consistent with GDP above 3%. Keep in mind though that earlier this month, Governor Philip Lowe said that a rate hike is still ‘some time away’.

The stall on Aussie may have been due to that shortly after the minutes crossed the wires, China’s Ministry of Commerce issued a statement to the US tariff threats. According to them, they said that the US tariff decision is against market rules and that China will take strong countermeasures if the US issues a new list. This is not too surprising given developments that occurred over this past weekend.

There, the world’s second largest economy responded to the $50b US tariffs by imposing levies with an intent of equal scale. Signs of more comebacks may continue weighing on risk appetite, sending the Aussie lower. More may indeed come given that Trump threatened to impose additional taxes on Chinese products in the event of retaliation. 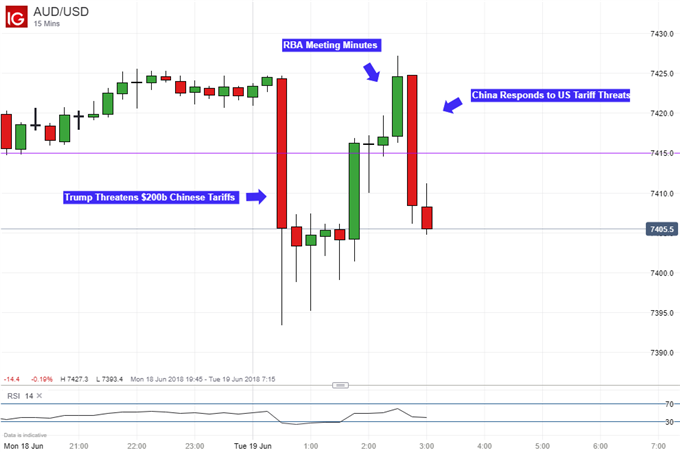 On a daily chart, AUD/USD has conveniently paused its decent since early June on the May 9 low around 0.7414. With that said, it has closed at its lowest point this year so far as well as since June 2017. Given the recent renewed trade war fears, the pair could be on the verge of closing below the May 9 low, opening the door to further losses ahead. 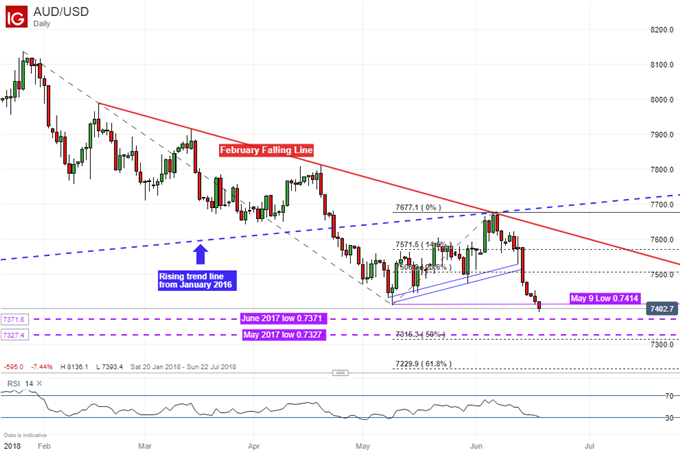