USD/JPY May Fall After Japan CPI if HKMA Sours Sentiment

The Japanese Yen was steady as an in-line local CPI report crossed the wires, however USD/JPY could be getting ready to decline after struggling to make progress to the upside. Japan’s headline inflation rate remained unchanged in March at +1.1% y/y as expected, down from +1.5% in April. CPI excluding fresh food was +0.9% y/y and if you also subtract energy, it was +0.5%. All as expected.

As you can see in the chart below, inflation in Japan has generally been trending higher for the past 1.5 years give or take. However, the Bank of Japan is still in the middle of its intense stimulus programme, While they have brought up the idea of a policy exit in the future, Governor Haruhiko Kuroda has reminded us that it’s too early for them to even start considering one. Earlier in the year, the Yen saw some gains when the idea was first brought up. But those quickly fizzled after Mr. Kuroda clarified that it’s still too soon. 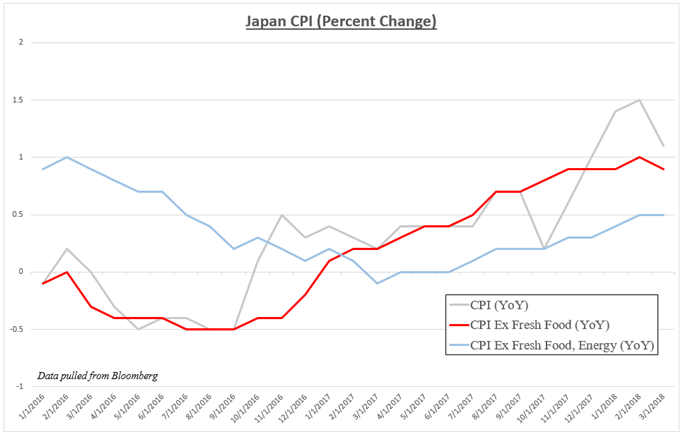 This seems to be for the right reasons. As you can see below, inflation (ex fresh food) is still below the central bank’s price target of 2.0 percent and has some ways to go. When taking into account that the Bank of Japan may not act on policy in the near-term as it awaits stable inflation, the Japanese Yen may be vulnerable to other catalysts. 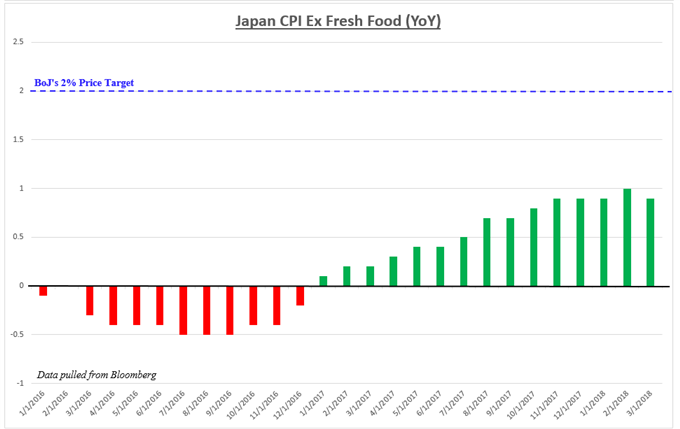 Those are mainly risk trends. In fact, just half an hour after the data was released, the Yen quickly appreciated as Tokyo went online. There, the Nikkei 225 dropped after market open, echoing declines seen on Wall Street in the session before. Soon after though, the anti-risk Yen depreciated after Japan’s Trade Minister Hiroshige Sekobolstered stocks. Mr. Seko said that both Shinzo Abe and Donald Trump had talks on strengthening economic cooperation.

With that in mind, keep an eye out for developments that may impact sentiment. One potential catalyst could be actions from Hong Kong’s Monetary Authority (HKMA) to defend their currency peg. Yesterday stocks endorsed their actions, and the anti-risk Yen fell, as they drained cash from the banking system. However, HKMA may come under pressure again since the US Dollar rose on Thursday against hawkish Fed monetary policy expectations. Depending on how they continue to handle the situation, the Yen could be at risk for some sudden swings. 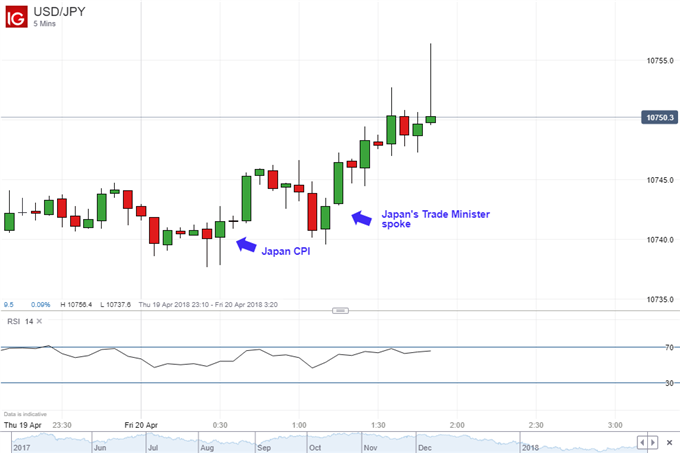 On a daily chart, the Japanese Yen is stuck under near-term resistance at 107.90. The pair has been slowly pushing higher since late March when it broke above a descending trend line from January. Negative RSI divergence has emerged though and it warns that momentum to the upside is ebbing. This opens the door for prices to fall or continue oscillating below resistance. 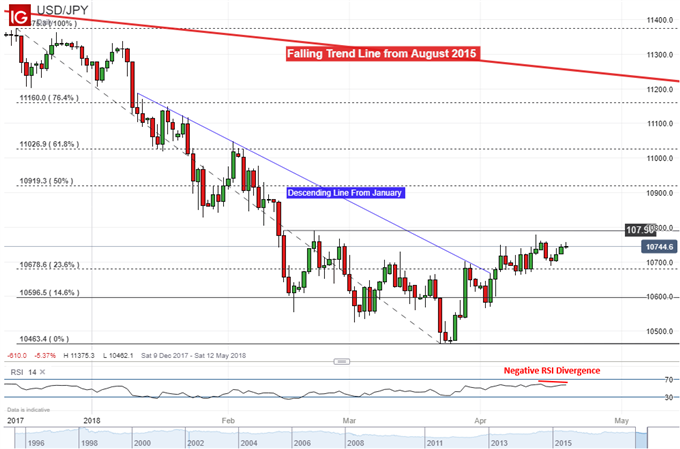