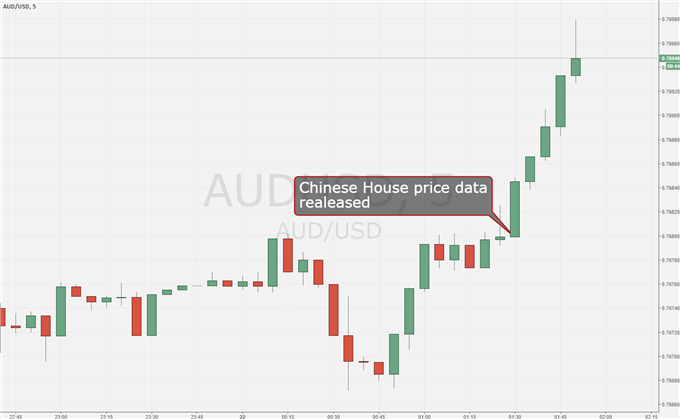 Australian Dollar Keeps Climbing As Chinese House Prices Do Too

The Australian Dollar rose following Wednesday’s release of Chinese house price data, but they may not have been behind its pep.

Beijing’s efforts to cool its housing market may be bearing modest fruit according to the numbers. While house prices continued to rise across the country in January, the pace of gains seems to be slowing.

However, regional hot spots clearly remain. Prices in Shanghai rose 23.8% on-year in January. That was below December’s 26.5% rise but still a chunky gain. In Beijing prices were up 24.7%. Existing-home prices rose in Beijing but fell in Shanghai. The average existing home price in the capital is still 34.6% higher than it was a year back.

This picture of more modest, all-country gains masking some very strong regional markets is not a new one for China. The authorities have taken measures to cool hot spots in the past and the latest data suggest that more of the same may be needed.

That said, home prices increased last month in the fewest cities for a year.

The Australian Dollar often acts as a liquid China proxy in the foreign exchange market. It may have done so after the data. AUD/USD certainly put in a modest rise, getting up to 0.76936 from 0.76799 before it. However, the pair seemed to have based at 0.76670 well before the numbers and had been rising into the release, so the link between the China data and the currency may not be clear.

The Aussie had already been lifted I the Asian session by Reserve Bank of Australia Governor Philip Lowe. Speaking in Sydney he doubted that more reductions in Australia’s record-low interest rate would be sensible.

Would you like to know more about financial-market trading? The DailyFX webinars could be just what you are looking for.