USD/JPY continues to pullback from the monthly high (109.79) to largely mirror the recent weakness in longer-dated US Treasury yields, and the Federal Open Market Committee (FOMC) Minutes may generate a larger correction in the exchange rate as the central bank remains reluctant to adjust the forward guidance for monetary policy.

USD/JPY extends the series of lower highs and lows from the latter half of last week after showing a limited reaction to the US Retail Sales report, and the exchange rate may continue to trade within the confines of the April range as it falls back towards the 50-Day SMA (109.06).

The FOMC Minutes may reflect a dovish forward guidance as the central bank braces for a transitory rise in inflation, and it remains to be seen if the slowdown in Retail Sales will encourage the committee to retain the current course for monetary policy as household consumption holds flat in April after expanding a revised 10.7% the month prior.

Recent remarks from Fed Governor Christopher Wallersuggests the central bank will continue to utilize its emergency tools as the permanent voting-member on the FOMC argues that “we need to see more data confirming the economy has made substantial further progress before we adjust our policy stance,” and Chairman Jerome Powell and Co. may stick to the same script at its next interest rate decision on June 16 as the major of Fed officials

Until then, USD/JPY may continue to track the swings in longer-dated US Treasury yields even though the FOMC stays on track to “increase our holdings of Treasury securities by at least $80 billion per month and of agency mortgage-backed securities by at least $40 billion per month,” but the recent flip in retail sentiment may coincide with a further appreciation in the exchange rate like the behavior seen earlier this year. 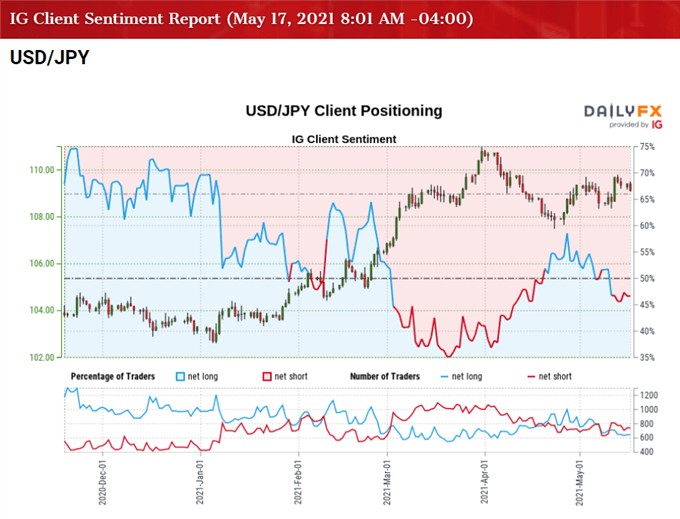 The IG Client Sentiment report shows 47.47% of traders are currently net-long USD/JPY, with the ratio of traders short to long standing at 1.11 to 1.

With that said, the decline from the March high (110.97) may turn out to be a correction rather than a change in trend if the recent flip in retail sentiment mimics the crowding behavior from earlier this year, but the exchange rate may continue to trade within the confines of the April range even as the move above the left shoulder largely removes the threat of a head-and-shoulders formation. 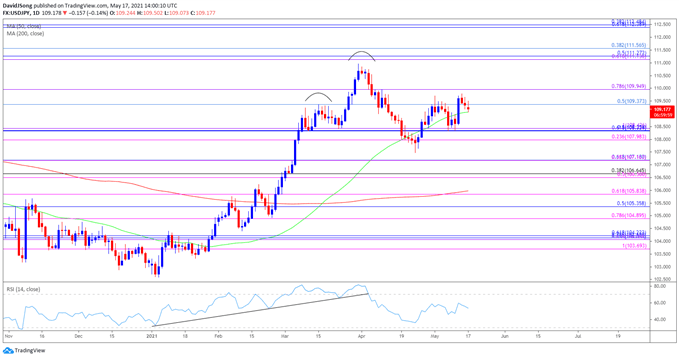