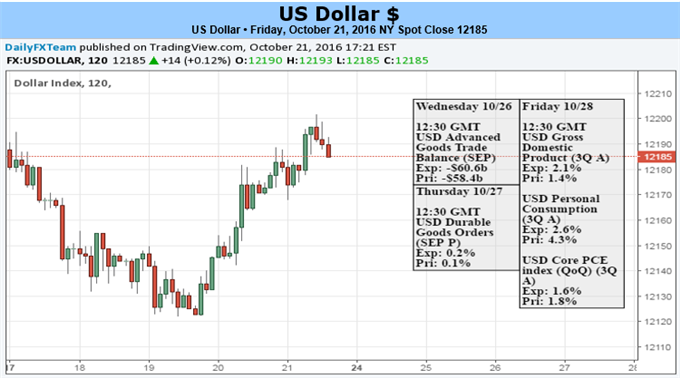 The ICE Dollar Index (DXY) posted another impressive week’s advance through this past Friday. That marks three consecutive weeks that the benchmark currency has climbed to eight-month highs – and at the fastest pace since the November rally back to 12-year highs. Given this performance, traders are left to wonder if the Greenback has changed gears and returned to the bull trend that was waylaid nearly 18-months ago. There are certainly go-to fundamental rationalizations for those looking to jump on the momentum: the Fed is promising a hike in the foreseeable future; ominous clouds over risk trends necessitate a safe haven; and faltering commodity trend will indirectly bolster the primary pricing instrument. Yet, these are overreaching for convenience. Congestion is a more universal condition, and the Dollar’s performance is far from uniform.

When taking measurements, it is important to understand your tools and their calibrations. For those referencing the DXY, its performance does look impressive. Yet, there is a distinct concentration to this barometer that provides a skew to the signal. The ICE index is trade-weighted, which given heavy weighting to EUR/USD (the most liquid exchange rate in the FX market by a wide margin). This benchmark pair dropped 2.8 percent over the past two weeks – the biggest Dollar move amongst the majors – to a 7-month low. The other ‘majors’ were bound to their ranges. That would suggest the Dollar could take limited credit for this progress.

Technically speaking, the Greenback could capably rally forever should its major counterparts consistently lose ground. However, that is unlikely in a market defined by congestion and uneasy complacency. From the Euro, lost ground after the ECB’s decision to defer its taper announcement doesn’t write the script for a full topple for the currency. Pound has shown greater resilience to Brexit headlines this past week. Yen and commodity-based crosses meanwhile are waiting for their cues from risk benchmarks. This is not a cast of characters that seem likely to put the Dollar in the spotlight.

Looking out over the coming week’s docket, however, there is reason to believe the Greenback may be able to rest back control of its own bearings. Monetary policy is generally the most productive theme for the FX market these past years, so it is reasonable to presume that it would offer the most ready traction should it look for grip. Speculation is not focused on the November 2nd meeting (due in part to its proximity to the US Presidential Election and the uncertainty that event presents) but rather the December 14th ‘anniversary’ to the first the first hike. Fed Fund futures price approximately a 66 percent probability that the central bank moves at that meeting.

To bolster the conviction of a 12-month follow up to ‘liftoff’, the most capable event to move the needle is the US 3Q GDP update. This is the kind of systemic assessment of the economic picture that can be considered black-and-white in defining the conditions for monetary policy. A significant rebound from the second quarter’s moderate 1.4 percent pace could solidify hike motivation. Indeed, the consensus forecast is for a pickup to a 2.5 percent pace of expansion. Yet, it should be said that such a forecast sets the bar high. Further, this key event is due at the very end of the week.

Other fundamental fodder to move the rate view and/or the Dollar include a host of Fed speeches penciled in. The terms of this policy group’s tone is changing with remarks like those made by San Francisco Fed President John Williams who said they should have hiked in September and low rates can lead to a recession. Another indicator to keep tabs on is the Conference Board’s consumer sentiment survey. Both the headline and components are valuable forecasting for economic activity moving forward.