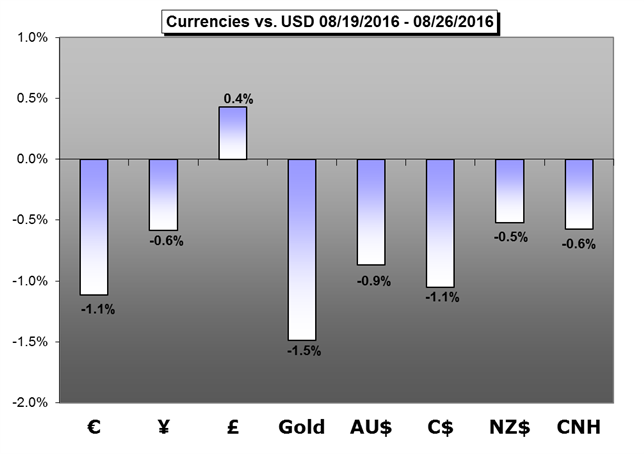 Weekly Trading Forecast: A Packed Docket Looks to Keep Markets to the Fire

A late bloom of volatility this past week will be met with a broad range of fundamental fuel spanning from sentiment surveys to August NFPs and Jackson Hole Symposium to G-20 summit.

It has been months since the market has looked at the Dollar with as much interest as the currency was paid through the close of this past week.

The key developments coming out of the U.K./U.S. next week may spur further losses for GBP/USD as the Bank of England (BoE) remains poised to further embark on its reestablished easing-cycle, while Federal Reserve officials talk up expectations for a 2016 rate-hike.

The Japanese Yen fell versus the US Dollar for the first week in five on the heels of a US Federal Reserve-led Dollar surge.

The Australian Dollar may continue to fall for a third week as US jobs data bolsters Fed rate hike speculation while domestic news-flow sends dovish signals.

Canadian economic data of recent hasn’t been very positive; and this makes the Canadian economy like pretty much every other major economy on the planet Earth at the moment, where a lack of growth coupled with continued disappointment in economic numbers is painting a fairly negative picture for near-term economic prospects.

The New Zealand Dollar has lost the pace of its recent rise, but the trend remains definitively higher. Economic data continues to be more positive than economist’s expectations as even the recent 25bp rate cut was less than some that expected a possible 50bp cut.

Fed Chair Yellen’s comments on monetary policy on Friday led to the widest trading range of the week for the Dollar/Yuan after relatively quiet price action for the four days prior.

Gold prices are lower this week with the precious metal down 1.34% to trade at 1324 ahead of the New York close on Friday. The move comes on amid a fresh batch of central bank rhetoric with officials continuing to suggest that the door remains open for a September rate hike.