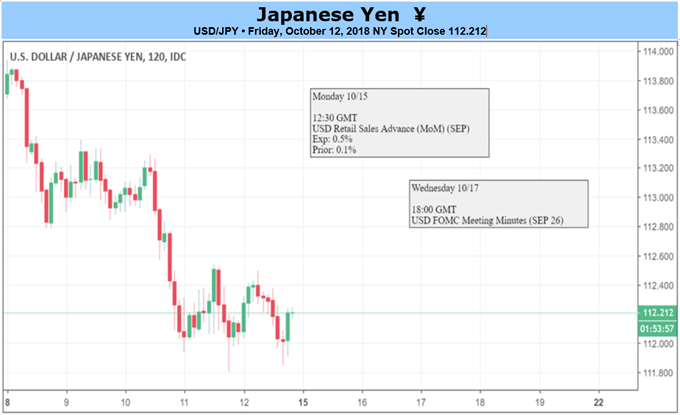 Fresh data prints coming out of the U.S. economy may curb the recent selloff in USD/JPY as the Retail Sales report is anticipated to show a 0.6% rise in household spending, and the Federal Open Market Committee (FOMC) Minutes due out on October 17 may ultimately boost the appeal of the dollar as the central bank appears to be on track to deliver another rate-hike in 2018.

A marked pickup in private-sector consumption may encourage the Federal Reserve to adopt a more hawkish tone at the next meeting in November as it remains one of the biggest drivers of growth and inflation, and Chairman Jerome Powell & Co. may prepare U.S. households and businesses for an imminent rate-hike as the central bank largely fulfills its dual mandate for full-employment and price stability. 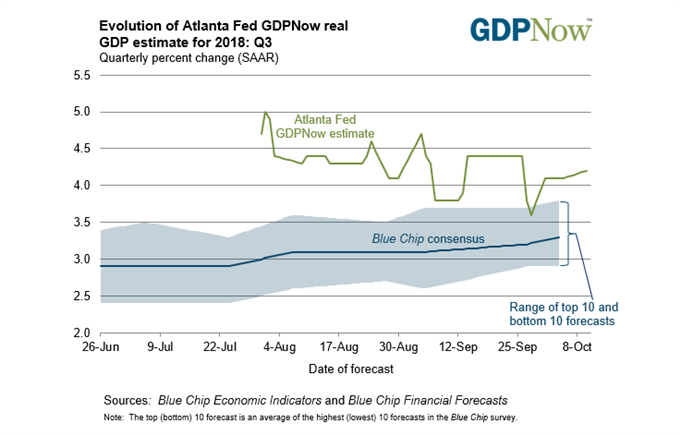 Keep in mind, recent remarks from Chicago Fed President Charles Evans, who joins the FOMC in 2019, suggest the central bank could be forced to extend the hiking-cycle ‘maybe 50 basis points above neutral’ in response to the ‘very strong economy,’ and a growing number of central bank officials may adopt a similar tone as the GDPNow model continues to improve, with the 3Q 2018 estimate for real GDP growth (seasonally adjusted annual rate) now standing at 4.2%.

In turn, market participants may pay increased attention to the fresh batch of central bank rhetoric on tap for the week ahead as Governor Lael Brainard, St. Louis Fed President James Bullard, Governor Randal Quarles, Atlanta Fed President Raphael Bostic and Dallas Fed President Robert Kaplan are slated to speak, and a batch of hawkish comments may curb the recent weakness in USD/JPY especially as the Bank of Japan (BoJ) shows little to no interest in moving away from its Quantitative/Qualitative Easing (QQE) Program with Yield-Curve Control. Sign up and join DailyFX Currency Analyst David Song LIVE for an opportunity to discuss potential trade setups! 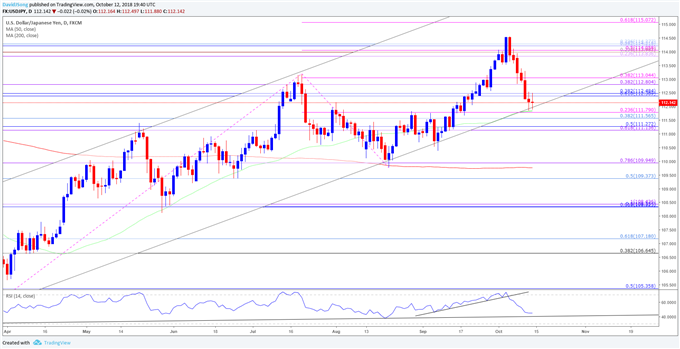 With that said, USD/JPY may continue to cling to the upward trend from earlier this year following the failed attempts to break/close below the 111.10 (61.8% expansion) to 111.80 (23.6% expansion) area, and recent developments in the Relative Strength Index (RSI) also present a constructive outlook for dollar-yen as the oscillator appears to be reversing course ahead of oversold territory.