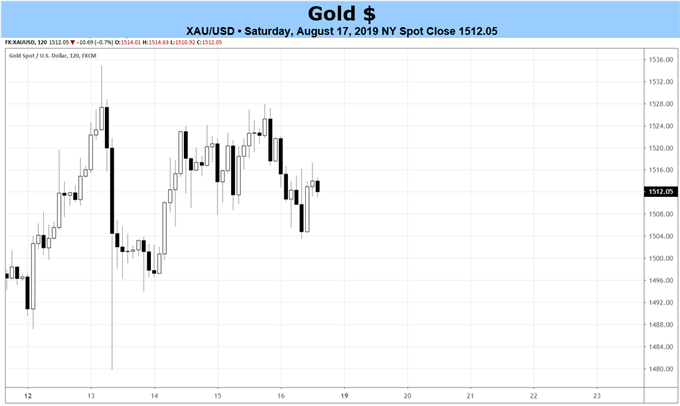 But the central focus of most market participants is gold prices in USD-terms (XAUUSD), and that too produced another strong week, adding 1.11%. Gold prices, regardless of the currency basis, have been on a strong run higher in recent weeks in part to the global monetary response to the US-China trade war; we’ll get clarification on the state of global easing this week as central bankers from around the world descend on Jackson Hole, Wyoming for the Federal Reserve’s annual Economic Policy Symposium.

Despite improved trading conditions for global equity markets in recent weeks, not much has changed in a positive manner along the US-led trade war front. Sure, there is a détente in the US-China trade war after the US tariffs at a clip of 10% on $300 billion of imported Chinese goods were pushed back from September 1 to December 15.

Yet there is a strong argument to be made with central banks unveiling more accommodative, dovish policy in recent weeks – a trend that is expected to continue – the fundamental backdrop for gold prices remains bullish in the long-term horizon. Falling sovereign bond yields (particularly German Bunds, UK Gilts, and US Treasuries since the start of May) continue to drop lower, and as a result inflation-adjusted yields remain in negative territory – good news for precious metals.

Volatility Tamped Down Ahead of Fed’s Jackson Hole Meeting

The Fed’s Jackson Hole Economic Policy Symposium this coming week should keep volatility tamped down in the days ahead. Traders typically don’t like to stake out significant positions ahead of the Fed’s annual summit; indeed, at the end of August, many trading desks have been left absent for summer vacation.

Beyond the prospect of an unforeseen development (see: US President Trump’s tweets) in the US-China trade war, the week leading into the Fed’s Jackson Hole Economic Policy Symposium is likely to be a quieter one – even if there are several significant pieces of data set to be released.

Elsewhere, gold prices in EUR-terms will come into focus with the release of the August Eurozone PMIs, particularly as odds for more easing from the European Central Bank at their September policy meeting have crept higher in recent weeks. 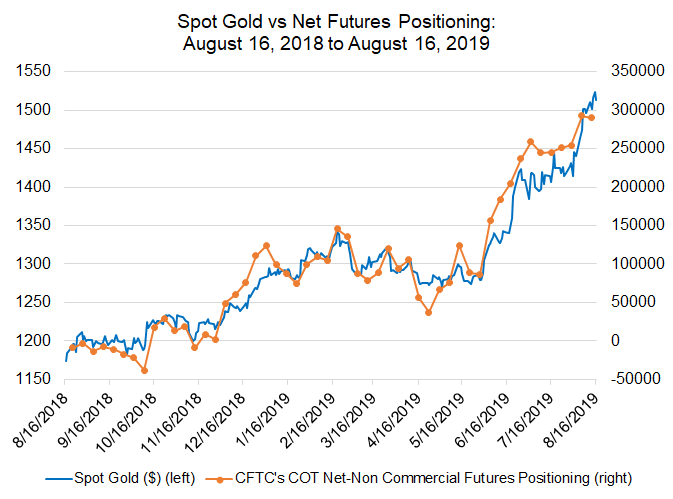 Finally, looking at positioning, according to the CFTC’s COT for the week ended August 13, speculators decreased their net-long gold futures positions to 290.1K contracts, down slightly from the 292.6K net-long contracts held in the week prior. The market is still the most net-long since September 2016 despite the slight moderation in bullish positioning.