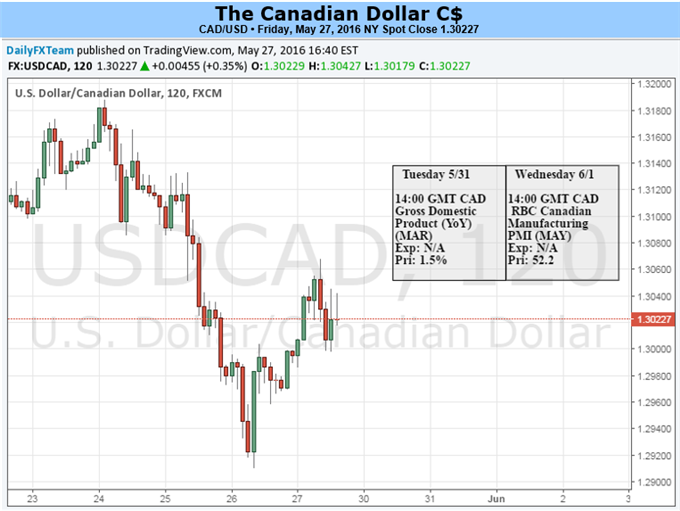 A pickup in the Canadian economy accompanied by slowing job growth in the U.S. may fuel a near-term decline in USD/CAD as the Bank of Canada (BoC) appears to be moving away from its easing cycle, while the Federal Reserve remains in no rush to further normalize monetary policy.

Canada’s first-quarter Gross Domestic Product (GDP) report is anticipated to show the growth rate increasing an annualized 2.9% following the 0.8% expansion during the last three-months of 2015, and signs of a stronger-than-expected recovery may encourage the BoC to endorse a wait-and-see approach throughout 2016 especially as Prime Minister Justin Trudeau implements fiscal measures to assist with the rebalancing of the real economy. Even though the BoC anticipates real GDP to contract in the second-quarter of 2016, Governor Stephen Poloz and Co. may increase their efforts to ward off speculation for additional rate-cuts as the ‘risks to the Bank’s inflation projection remain roughly balanced.’ In turn, the less-dovish outlook for monetary policy may prop up the Canadian dollar over the near to medium-term as the BoC looks to conclude its easing cycle.

At the same time, another 160K expansion in U.S. Non-Farm Payrolls (NFP) may roil market expectations for an imminent Fed rate-hike as central bank officials wait for a further improvement in labor-market conditions. Even though Chair Janet Yellen sees scope to increase the benchmark interest rate over the coming months, a further slowdown in employment may spur another 9 to 1 split at the next policy meeting in June as central bank officials retain a cautious outlook for the U.S. economy and warn ‘survey-based measures of longer-run inflation expectations were little changed, on balance, in recent months, while market-based measures of inflation compensation were still low.’ 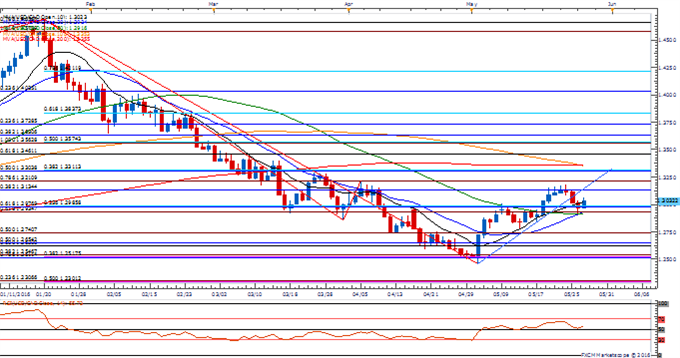 With USD/CAD largely failing to preserve the upward trend from early May, the near-term advance in the exchange rate may ultimately turn out to be a failed attempt to test the April high (1.3218), and the pair may continue to give back the rebound from 1.2460 should the key data prints out of the U.S. and Canada spur a further shift in the monetary policy outlook.