The Euro took a hit after a weak US consumer confidence number exposed the emerging frailties to growth in the world’s largest economy. It saw a round of US Dollar buying and the Kiwi was hit particularly hard.

The Conference Board consumer confidence index came in at 98.7 against expectations of 100.0. Additionally, the previous read of 106.4 was revised lower to 103.2

APAC equities followed Wall Street lower with all indices in the region finishing in the red.

San Francisco Fed President Mary Daly had a rosier outlook with her comments overnight. She doesn’t think a recession is coming and in regard to rate hikes, she said, “they will be tapping on the brakes, rather than slamming on the brakes and going over the handle-bars.”

New York Fed President John Williams joined in the ‘no recession’ chorus and sees a 50 or 75 basis point hike at the next meeting.

Crude oil is higher after OPEC said that they are half a billion barrels behind the target announced in May 2020. They reported running 2.7 million barrels a day behind their target output in May.

The WTI futures contract is at near US$ 111 bbl and the Brent contract is around 117 bbl at the time of going to print. The gold price is steady near US$ 1,821 an ounce after sliding in the North American session.

ECB President Christine Lagarde announced that the bank will increase their bond buying capacity while they prepare for a looming rate hike. As existing holdings of bonds mature, they will re-invest the proceeds where it is needed.

The ECB forum is under way and a panel discussion of heavy hitters will be held at 1300 GMT. This will include ECB President Christine Lagarde, Federal Reserve Chair Jerome Powell and BOE Governor Andrew Bailey.

Elsewhere, China announced a reduction in quarantine requirements to 10-days, boosting gaming stocks. The move may not have too much immediate impact, but it could be a signal for a change in overall policy from the communist party.

US GDP is due out today and Cleveland Fed President Loretta Mester due to speak at the ECB forum, separate to the panel discussion. Additionally, St. Louis Fed President James Bullard will be crossing the wires.

EUR/USD appear range bound for now and it’s possible that commentary from todays ECB forum could spark some volatility. 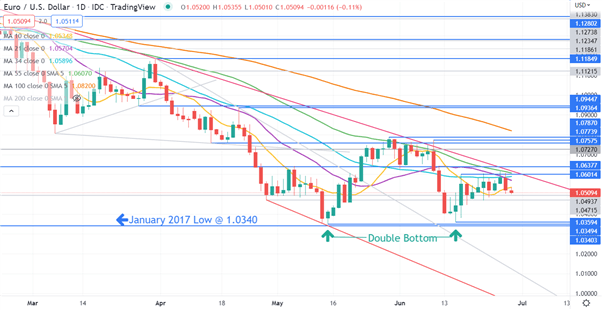