The rest of APAC equity indices were all the green to some degree. Despite the rosy mood, futures are pointing to a sluggish start to Wall Street ahead.

Positive risk appetite led to gains for the Aussie, Kiwi and Norwegian Krone. Not surprisingly, the US Dollar, Japanese Yen and Swiss Franc were the underperformers through the Asian session.

Treasury bonds continue to move higher in price as their yields edge lower. The 10-year note is now returning 2.75%, a long from 3.20% seen earlier this month. This has played a role in undermining USD outside of swings in sentiment.

The upbeat risk sentiment out of China lifted most of the commodity complex. Although gold was only slightly higher, trading near US$ 1,854 an ounce.

Crude oil had already rallied in the North American session with the WTI futures contract eclipsing US$ 114 and the Brent contract is around US$ 117.50.

Yesterday, the UK government announced a windfall tax on the out-sized profits of oil and gas companies. The revenue will be used for a one-off payment of £650 to low-income earners.

Treasury bonds continue to move higher in price as their yields edge lower. The 10-year note is now returning 2.75%, a long from 3.20% seen earlier this month.

Looking ahead, the focus will be on the release of the Federal Reserve’s preferred inflation measure, US core PCE price index.

Other data out of the US will include personal income and spending, wholesale inventories and University of Michigan consumer sentiment

The Hang Seng index looked to break the recent range but stalled at the 55-day simple moving average (SMA). 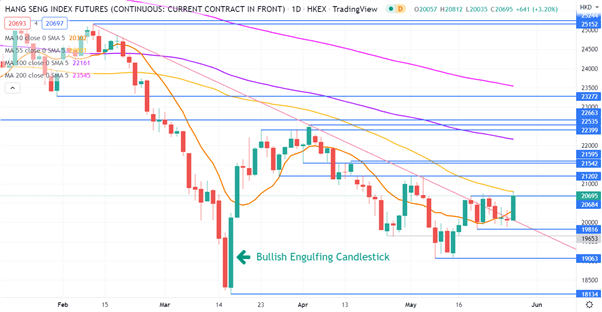