Risk appetite evaporated during Asia trade with Dow Jones futures plunging over 1.5%, as the number of confirmed COVID-19 cases in the United States surpasses 2 million.

The haven-linked US Dollar and Japanese Yen soared as the risk-sensitive Australian Dollar collapsed back below 70 cents.

US Treasury yields fell as the Federal Reserve announced it will continue to purchase bonds and mortgage-backed securities. 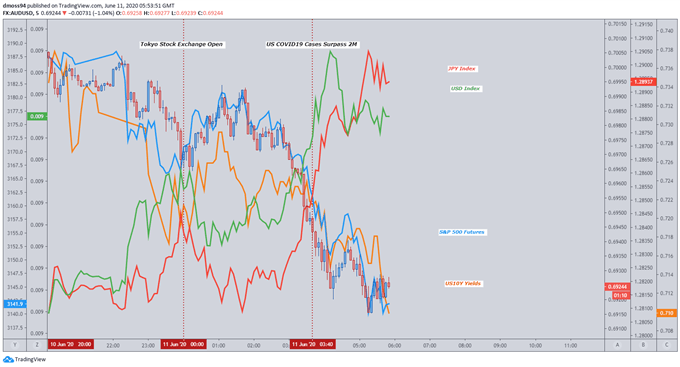 Overnight comments from Chair Jerome Powell have taken the sting out of the recent rally in risk assets, dismissing the better-than-expected Non-Farm Payrolls (NFP) report showing a record 2.5 million jobs added in May as “clear evidence of just how uncertain things are”.

Keeping the target rate for the federal funds rate at 0 to 0.25%, the FOMC is “not even thinking about raising rates” as they remain “strongly committed” to doing “whatever we can for as long as it takes”.

Expanding its balance sheet “at least at the current pace” through Treasury purchases of $80 billion a month and mortgage-backed securities of $40 billion, it’s clear that the central bank doesn’t believe the worst has passed as there are still “considerable risks to the economic outlook over the medium term”.

The United Kingdom is in the midst of a severe economic contraction, with the OECD forecasting GDP to shrink as much as 14% in 2020 “if there is a second virus outbreak later in the year”; in line with the ‘double-hit scenario’.

A recovery absent of a secondary outbreak, classified as the ‘single-hit scenario’, could still see “GDP fall sharply by 11.5%” as the service-based economy suffers from the ‘stay-at-home’ measures which may have “reduced output directly by one-third”.

Although daily cases have been trending downwards, recent protests may lead to a surge in new cases, similar to what is currently being seen in several states in the US. 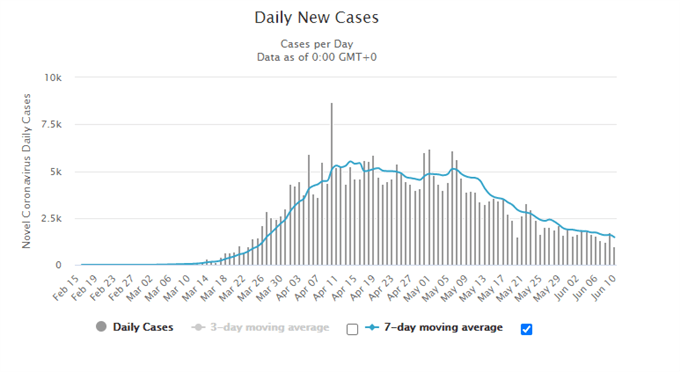 Therefore, the OECD recommended that current economic measures “should be kept in place as long as needed” and “fiscal policy should remain supportive” as unemployment is expected to exceed 10% and “remain elevated throughout 2021”.

Furthermore, the economic organization urged the United Kingdom to agree to a temporary arrangement with the European Union “to stay in the EU Single Market beyond 31 December 2020”.

However, with the EU’s chief negotiator Michel Barnier confirming the Union is “in favour of an extension, particularly given the current circumstances” there is still time, before the July 1 extension deadline, for the PM to reconsider. 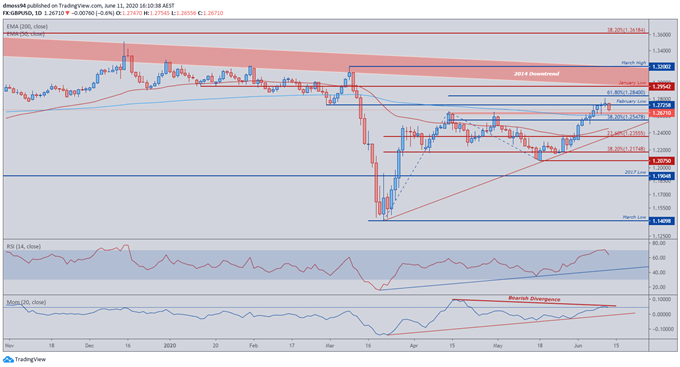 Psychological resistance at the 1.28-handle proved too much for GBP/USD as a Spinning Top followed by a Bearish Engulfing candle may signal the reversal of a 10-day ‘bull run’.

Bearish divergence between price and momentum highlights a level of exhaustion in the recent rally, with RSI dipping prior to overbought territory providing further bearish bias.

The 200-day moving average (1.2610) may provide temporary support for GBP, however the sharp correction in RSI suggests strengthening downside momentum that could propel price back to 12-week trend support.

A break and close below trend support and the 23.6% Fibonacci (1.2355) may carve out a path back to the May low (1.2075), with RSI snapping its constructive trend possibly signalling a resumption of primary downtrend.