- FX Markets are continuing to show the potential for extension of ‘big’ moves in Euro and the Japanese Yen, and with Central Bank rate decisions from both economies scheduled to take place in the next 24 hours, the stage is set.

- EUR/USD is coming off of fresh 5-month highs as the prospect of QE-taper begins to gain steam, and USD/JPY is showing considerable strength as anticipation remains for the BoJ to stay one of the more ‘accommodative’ Central Banks.

The second half of this week’s calendar picks up considerably as we get rate decisions from the Bank of Japan on Thursday morning in Tokyo, followed by a European Central Bank meeting that kicks off a bit later in the day. Both Central Banks are dealing with similar issues right now, albeit on far different time-lines, as investors are looking for any clues that they might be able to gleam in the effort of finding out when each Central Bank is going to start to slow-down the massive monetary purchases that have driven each bank’s monetary policy for the past few years.

In Europe, we’ve already heard grumblings for the potential tapering of QE. The current bond-buying program is set to expire in December of 2017, and the big question is whether or not that gets extended or if the ECB is comfortable-enough to let the program end without some type of replacement. As of yet, we haven’t heard such a strategy from the head of the ECB, Mr. Mario Draghi, and any indication of such at tomorrow’s press conference after the rate decision could drive the Euro-higher. European data has been rather encouraging of recent, alluding to the continued showing of ‘green shoots’ in the European economy that may be signaling brighter days ahead.

EUR/USD put in a bullish-gap over the weekend as risk tolerance returned in a big way after the results of the first round of French elections. After that gap-higher, buyers returned after a quick pull-back to show a ‘higher-low’ at a key level of support around 1.0820, as this is the 50% retracement of the ‘post-Election’ move in EUR/USD. After that higher-low support came-in, a higher-high printed that represented a fresh 5-month high in EUR/USD, and this can be opening the door for further top-side continuation. For traders looking at taking on exposure, that same 1.0820 area could be an attractive area to watch for subsequent support.

In Japan, those grumbles have been far less vociferous as the Japanese economy is still quite far away from their 2% inflation target; but as signs of improvement have begun to show questions have arisen as to just how long the BoJ might wait to scale-back their ‘emergency-like’ monetary stimulus. At their rate decision in March, the bank showed no expediency in wanting to slow-down stimulus efforts. But in a report that circulated yesterday, BoJ Deputy Governor Kikuo Iwata said that the bank was conducting studies as to how it can end its monetary stimulus at some point in the future, despite the fact that Japan is still far away from the 2% target.

There was very little reaction from markets in response to this report, as Yen weakness caught another leg-lower, indicating that markets are anticipating the Bank of Japan to remain one of the ‘looser’ Central Banks as we wade deeper into Q2.

On the chart below, we can focus-in on the rather sharp move of recent weakness in USD/JPY. Price action in USD/JPY has run into a key level at ¥111.61, as this is the 50% retracement of the 18-year move in the pair, taking the high from the year 1998 down to the low set in 2011. Perhaps more importantly on a practical rather than theoretical basis is the fact that USD/JPY caught considerable support at this level during the pair’s most recent deluge. 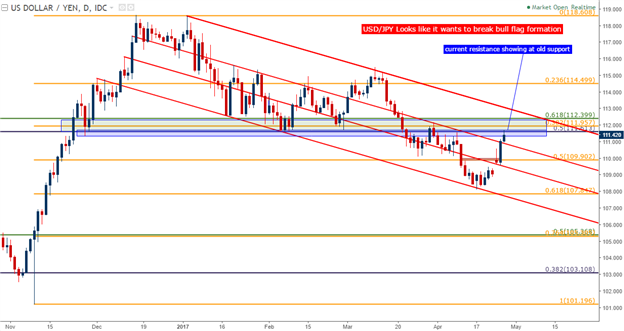 Given the veracity of the recent bullish move in USD/JPY, and also taken from the fact that the pair has just moved-in a really big zone of resistance in the ¥111.61-¥112.40 zone; and traders may want to wait in order to time bullish approaches. On the chart below, we’re looking at RSI on the hourly chart and how it’s begun to diverge as this bullish move has become stretched coupled with price action’s ascension into this key zone of resistance. 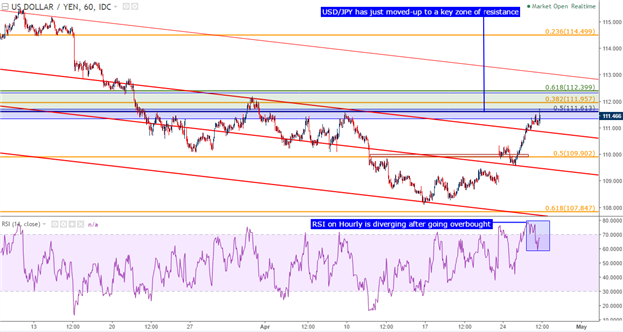 On the chart below, we’re looking at three potential support areas in the effort of trading a continuation move-higher. 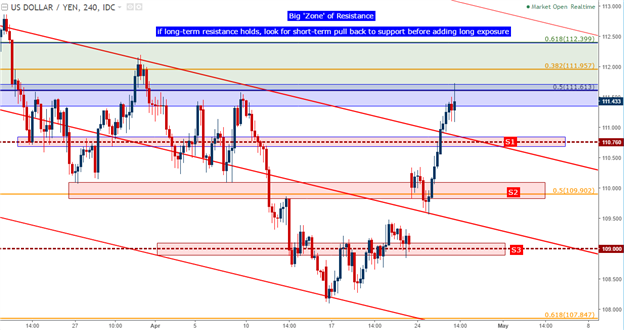 The cross-pair of EUR/JPY is primed to move over the next couple of days. We’ve just published a technical update for the pair entitled, Threatening a Bullish Break of Bear Pennant. For traders that do want to maximize exposure on themes of both long Euro and short Yen going into tomorrow’s Central Bank announcements, EUR/JPY could offer a rather exciting setup as we’ve seen a considerable insertion of volatility of recent. Below, we look at the bear pennant formation that appears to be on the verge of breaking, and if you’d like to look at strategy for trading around this theme, please check out our earlier published article on EUR/JPY.