- U.S. Consumer Confidence to Narrow for Second Time in 2017.

- Sentiment Survey to Pullback From Highest Reading Since 2001.

The Conference Board’s U.S. Consumer Confidence survey is expected to pullback from the highest reading since 2001, but the data print may generate a limited reaction as attention turns to the slew of speeches coming out of the Federal Reserve.

Market participants may put increased emphasis on the fresh comments from Chair Janet Yellenamid the uncertainty surrounding the U.S. fiscal outlook, and the remarks may prop up the dollar should the central bank head continue to forecast three to four rate-hikes for 2017. However, Chair Yellen may adopt a more cautious tone as ‘market-based measures of inflation compensation remain low; survey-based measures of longer-term inflation expectations are little changed, on balance,’ and the recent weakness in the greenback may gather pace going into April should the comments drag on interest rate expectations.

Rising costs paired with the slowdown in private-sector lending may spur a marked decline in consumer confidence, and a weaker-than-expected print may produce further losses for the dollar as market participants push back expectations for the next Fed rate-hike.

Nevertheless, the ongoing improvement in labor market dynamics accompanied by signs of stronger wage growth may spur another unexpected pickup in household sentiment, and a positive development may heighten the appeal of the greenback as it puts increased pressure on the FOMC to raise the benchmark interest rate sooner rather than later.

Bearish USD Trade: Conference Board Survey Narrows to 114.0 or Lower 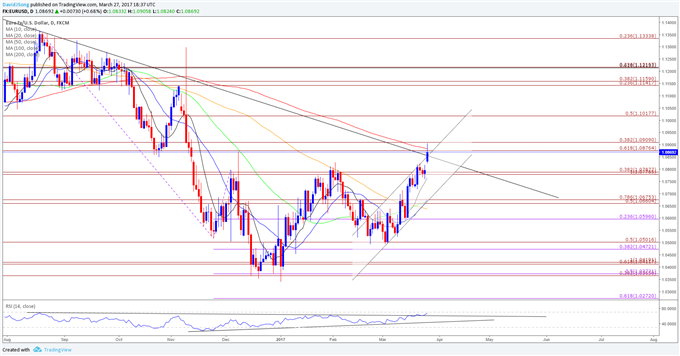 The Conference Board’s U.S. Consumer Confidence survey unexpectedly increased to 114.8 from a revised 111.6 in January to mark the highest reading since 2001, with the gauge for future expectations climbing to a two-month high of 102.4. The ongoing improvement in household sentiment may keep the Federal Open Market Committee (FOMC) on course to further normalize monetary policy over the coming months as the central bank anticipates ‘further gains in consumer spending would contribute importantly to economic growth in 2017.’ Despite the better-than-expected print, the greenback showed a limited reaction to the survey, with EUR/USD struggling to hold above the 1.0600 handle as it ended the day at 1.0576.

EUR/USD – Will it Vote Yes or No on a Breakout?

FTSE 100 Dropping into Trend Support, but Will It Hold?