Yen May Rise, USD/JPY Reversal Ahead After Trump Trade Talk?

The anti-risk Japanese Yen outperformed against its major counterparts as sentiment deteriorated during the US trading session. While the S&P 500 closed 0.16 percent higher compared to yesterday, most of its upside progress was diminished. Declines were more pronounced in the MSCI Emerging Markets Index which both gapped lower and traded 0.65 percent to the downside.

Hesitation from investors could be traced to uncertainty about the road ahead for US-China trade talks. Since the two agreed to a “phase one” accord, markets have been greeted with ongoing back and forth in verbal updates such as today. While US President Donald Trump touted that a deal could occur soon as “China wants to make one”, he also reminded watchers of the consequences should negotiations fall apart.

Beijing has made it clear that it not only wants to see the US hold off on raising tariffs, but also to begin unwinding them. That is why markets welcomed when it was revealed that Washington could reduce about $112b worth in levies against China, only to be jawboned by comments to the contrary from Trump. Over the past 24 hours, the sentiment-linked Australian and New Zealand Dollars aimed lower.

The latter was particularly battered over the past 24 hours by softer New Zealand inflation expectations. Amidst all this noise, the haven-linked US Dollar aimed cautiously higher as benchmark stock indexes remained on the defensive. After Trump spoke, White House Economic Adviser Larry Kudlow reiterated much of his language. He said that the country would raise tariffs in the event of a no-deal.

With that in mind, Asia Pacific benchmark stock indexes could echo the bittersweet tone seen from investors during the Wall Street session. That may continue supporting the anti-risk Japanese Yen at the expense of the AUD and NZD. The latter will be closely watching the incoming RBNZ monetary policy announcement. Overnight index swaps are pricing in about a 76% chance of a 25bp interest rate cut.

Join me later today as I cover the RBNZ rate decision and New Zealand Dollar outlook starting at 00:45 GMT on Wednesday the 13th

USD/JPY is looking increasingly at risk to a top. A Rising Wedge chart pattern – typically a bearish formation - signals that the dominant uptrend from late August could reverse course given a daily close under the floor. On top of this, USD/JPY formed an Evening Star under 109.32 when prices tested the August 1 high. This is a bearish candlestick pattern that could come into play with further downside progress. 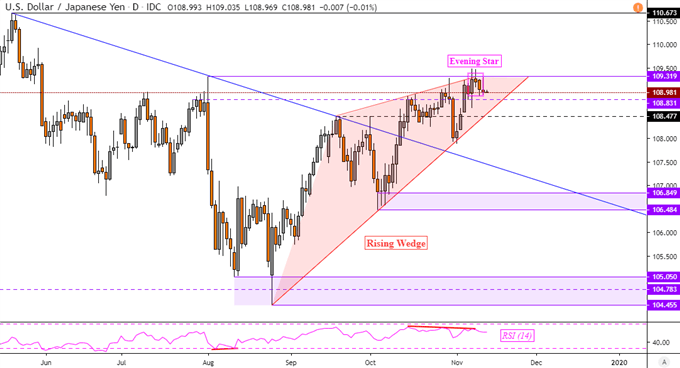