The Canadian Dollar underperformed against the US Dollar on Friday as a softer-than-expected local jobs report fueled BoC rate cut bets. In October, Canada lost 1.8k employed positions when economists were anticipating a 15.0k increase. Most of these were lost from the full-time sector (-16.1k) while the typically less-favorable part-time segment gained 14.3k positions.

Meanwhile the anti-risk Japanese Yen and haven-linked US Dollar outperformed as the markets received opposing trade war headlines. Initially, stocks sank after US President Donald Trump said there was no official agreement to rollback Chinese tariffs in the event of a “phase one” deal signing. This contrasted with prior news to the contrary.

Then, the US President stated that a deal would be signed in the US “if reached”. By the end of the session, the S&P 500 closed 0.26 percent to the upside as markets remained hopefully of a trade accord. The British Pound extended declines from Thursday after Moody’s changed the UK’s credit rating outlook and revised it to negative from stable. This was largely as a result of ongoing Brexit “paralysis”.

With that in mind, as liquidity returns at the onset of the new trading week, Sterling may extend its decline as it attempts to clear key support. A relatively quiet economic docket during Monday’s Asia Pacific trading session places the focus for currencies on risk trends. It remains to be seen which way regional bourses will favor given Friday’s opposing developments in US-China trade news.

USD/CAD has extended its near-term uptrend after finding a bottom during the end of October – as anticipated. Prices are sitting on the outer edge of immediate resistance at 1.3226. A daily close above this level may open the door to revisiting the former rising support line from July. It may establish itself as new resistance. Otherwise, a close under 1.3206 risks reversing recent upside progress. 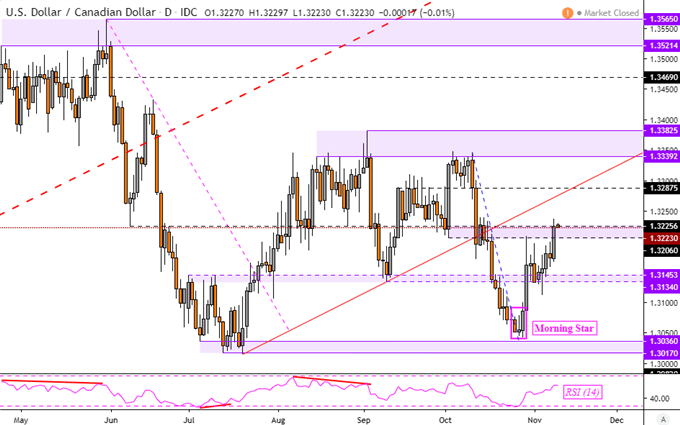