US Dollar Uptrend at Risk, Japanese Yen May Gain as Stocks Sink

The US Dollar weakened against its major counterparts on Wednesday, hindered by the latest local retail sales report. Spending declined 0.3 percent m/m versus +0.3% anticipated, down significantly from the +0.6% outcome in August. That was the first contraction in retail sales in seven months. It also brought with it concerns about the health of the consumption side of the economy which accounts for about 2/3 of GDP.

As a consequence, local front-end government bond yields declined as markets firmed October Fed rate cut bets. Fed funds futures are pricing in about an 84.2 percent chance that the central bank will deliver a 25bp reduction. These increasingly dovish expectations were not enough to propel stocks higher, leaving the S&P 500 down about 0.2 percent for the day.

Meanwhile, the British Pound and Euro aimed cautiously higher as the latest Brexit developments poured cold water on a “no-deal” EU-UK divorce. UK Prime Minister Boris Johnson’s government noted that they intend to honor the Benn act. This means that the PM would have to ask for extending the Brexit deadline in the event of a no-deal. Boris Johnson has in the past refrained from upholding it.

Ahead, the Australian Dollar will be eyeing local jobs data. Australia is expected to add 15.0k positions in September as the unemployment rate holds at 5.3 percent. Lately, economic news flow out of the nation has been tending to disappoint relative to economists’ expectations. A downside surprise may fuel additional RBA rate cut bets, sinking AUD/USD.

Join Analyst Dimitri Zabelin at 00:15 GMT for live coverage of Australian jobs data as he goes over the reaction in AUD/USD!

Meanwhile, S&P 500 futures are pointing cautiously lower heading into Thursday’s Asia Pacific trading session. This could have the way for a “risk-off” tone in regional stock exchanges. That may in turn boost the anti-risk Japanese Yen versus its major counterparts as the US Dollar continues to see selling pressure in the aftermath of Wednesday’s dismal retail sales report.

The DXY Dollar Index has closed under key rising channel support from June, opening the door of a reversal of the dominant uptrend since then. Prices closed just above the former June 2017 high, leaving behind near-term support. A daily close under this level would open the door to testing the next psychological barrier between 97.44 and 97.59. 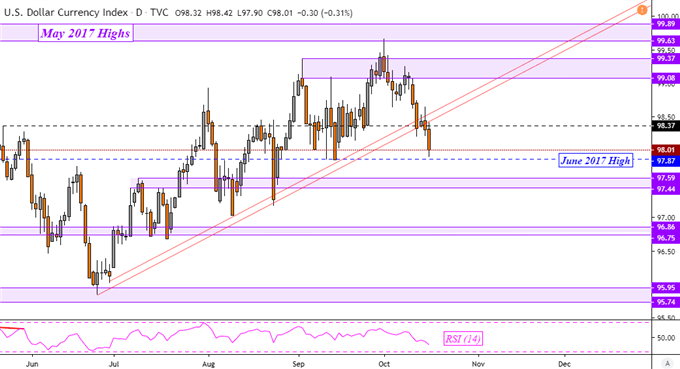