- The Reserve Bank of New Zealand has taken on a more dovish tone in recent months, with rates markets leaning towards a 25-bps rate cut in June.

Q1’19 New Zealand inflation data are due to underscore the Reserve Bank of New Zealand’s recent concerns about a sluggish economy, according to Bloomberg News surveys. Following the collapse of both agricultural and energy commodity prices in Q4’18, the prevailing trend of low inflation across the developed economic world is expected spread to New Zealand’s shore. Quarterly price pressures are expected in at +0.3% after having gained +0.1% in Q4’18, while the yearly reading is due in at +1.7% from +1.9%.

Despite the expected decline in inflation readings, traders may want to be alert for potentially better than expected price pressures. New Zealand Terms of Trade likely rebounded in Q1’19 because of a sharp rebound in milk product prices. The New Zealand Global Dairy Trade (GDT) Price Index was up nearly 17% in the first quarter, which should have helped inflation readings stabilize.

As such, even if inflation remains below the RBNZ’s medium-term target of +2%, a ‘beat’ on the data may see rates markets fail to become any more dovish than they currently are priced. After all, rates markets are pricing-in a 54.9% chance of a 25-bps rate cut by June 2019. Simply pushing back the timing of the first expected hike to September 2019 could provoke a short-term rally by the New Zealand Dollar. 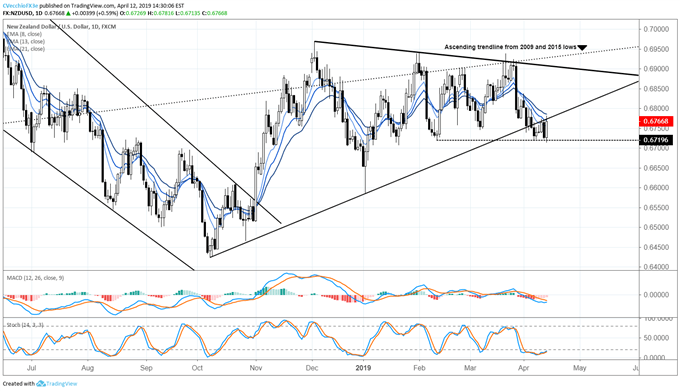 Since bottoming out of its 2018 downtrend in early-November, NZDUSD has spent most of 2019 consolidating in a symmetrical triangle. In April so far, price has broken down through the March low at 0.6745 and temporarily broken through the February low at 0.6720, culminating in a break of the uptrend from the October 2018 and January 2019 lows.

But as price action on Friday, April 12 drew to a close, the NZDUSD daily price candle was working on a bullish outside engulfing bar, suggesting that the recent breakdown lower may indeed me a false breakout. In the coming days, a return back within the symmetrical triangle would validate this point of view, and in turn suggest that the odds of return back towards symmetrical triangle resistance (coming in near 0.6900) would increase materially; a better than expected Q1’19 New Zealand CPI report could be the catalyst required. 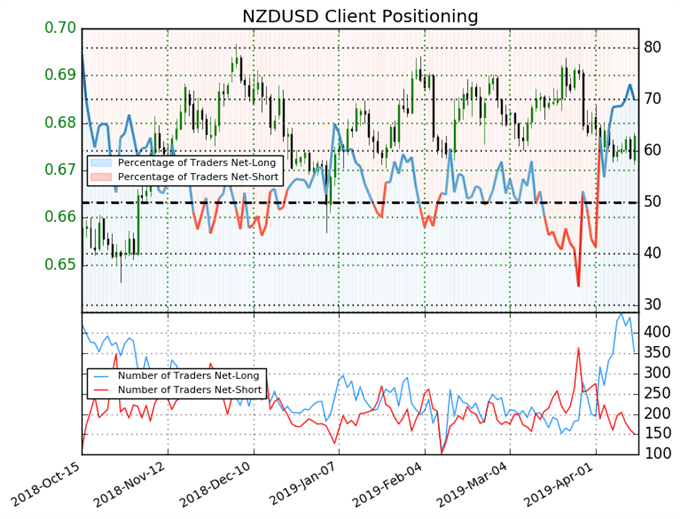