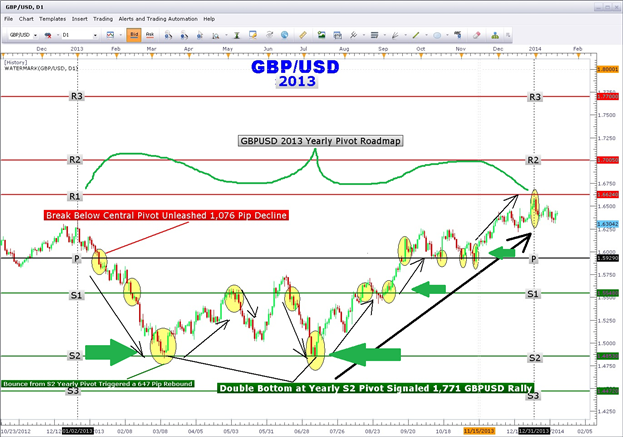 This continues a series of articles dedicated to revealing the yearly pivot points of each of the major currency pairs. This article is a “cheat sheet” of sort that you may want to print out and have handy so when price action tags any of these potential support and resistance levels, you will be ready to act. Past performance is not an indication of future results, however, the evidence supporting the effectiveness of yearly pivots is abundant.

But you may be asking, “Why should we look at yearly pivots?” It is a great question. In technical analysis, the longer the timeframe, the more statistically reliable the trendline, support and resistance level becomes as more data has gone into producing each point. This greater reliability added to the large moves that happen after a bounce and a break make these levels attractive buy and sell zones for Forex traders.

In the above GBPUSD 2013 daily time frame chart, notice how price action interacts with each yearly pivot level. Starting in January, GBPUSD moves down from the highs of 2012 near 1.6300 and push below the central yearly pivot (1.5929) and moved down 1076 pips to the S2 pivot (1.4850). This marked the low of the year made in March and again in July near 1.4812. GBPUSD did rally from the yearly forex central pivot to the S1 pivot.

GBPUSD retouched the S2 pivot to form a powerful forex double bottom pattern. The bullish engulfing candlestick pattern at S2 ignited a huge move back to the central forex yearly pivot and multiple bounces at the “P” level of support from September to November led to the continuation of the rally just short of the R1 on the last day of December at 1.6577, the high of the year.

While other traders may have been scratching their collective heads and wondering why GBPUSD moved the way it did.Forex yearly pivot traders would have been made aware months in advance of these significant levels. These traders would have had a plan in place, ahead of time, to trade at these important levels as price reacted to them. 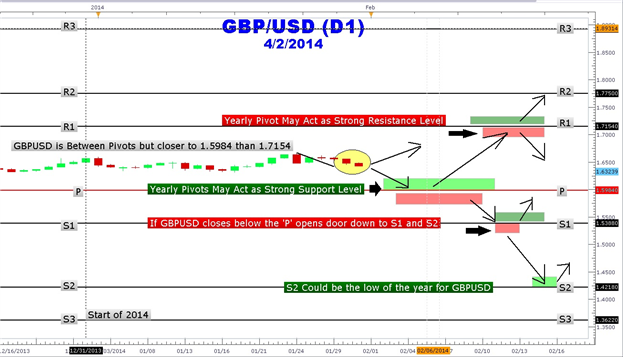 We have seen what yearly pivot levels meant in 2013 with GBPUSD. Could we see similar moves in 2014? As it is February, we are early enough in the year to project forex yearly pivot levels for GBPUSD using the pivot formula found in the previous article. These yearly pivots have been drawn manually, but you may check back with www.fxcodebase.com to see if they have created a plugin.

If price moves to this area of potential support, a good-sized tradable rebound to could result taking pair above the recent highs to the R1 yearly pivot (1.7154). Friday’s US employment number could be the trigger for a decline down to the next yearly pivot.

The double bottom at the S2 pivot level led to the spectacular 1700-pip run that closed out the year at multi-year highs. Using this “50,000 feet” satellite view of GBPUSD, traders can get the strategic big picture and act accordingly. Since they are yearly pivots, you only have to calculate them once!

This article outlined a plan for trading a head and shoulders breakout. Another way to find an entry is with the use of Fibonacci Retracements. Sign my guestbook to automatically enroll in a 20-minute Fibonacci Retracement course. By watching the slide presentation and taking the short quizzes you can dramatically increase your trading knowledge