Hesitation or Reversal for Dollar, Euro, FTSE, Gold and Oil?

See how retail traders are positioning in EUR/USD, DAX, Gold, Oil and other major assets intradayusing the DailyFX speculative positioning data on the sentiment page.

A Break of Necessity Versus a Break of Intention

I have differentiated numerous times before, but there is an important distinction between a technical break that occurs simply because it runs out of room versus one that develops behind a fundamental charge. It is reasonable to label these two types of technical developments as breaks of necessity versus a break of conviction or intent. The former is a purely technical inevitability. A congestion pattern has simply run out of range to traverse and it is in turn forced into a position to decide a direction. Yet, rarely does this move carry a trend once it has cleared the hurdle. Alternatively, a break that occurs due to an acute response to an important fundamental development or the exacerbation of an underlying trend is one that draw in speculative participation behind it. That can fuel a trend with an intensity and duration directly correlates to the important of the theme at hand. 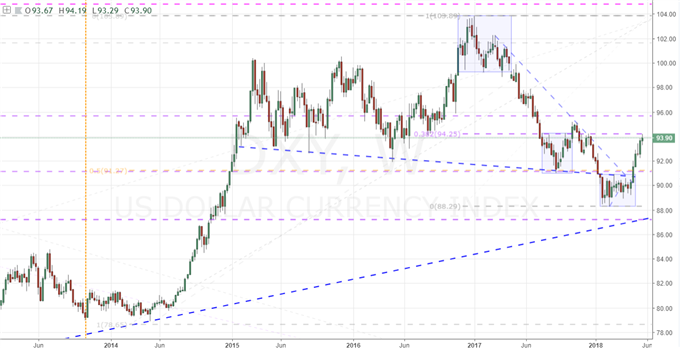 What are the Sources of Conviction?

Though technical levels can be reinforced by numerous overlapping qualifiers - technical patterns, zones, Fibonacci levels, moving averages, etc - the break can ultimately require little motivation. Adding a significant amount of momentum to the trigger requires some greater substance. There are certainly moves that arise that seem to defy traditional fundamentals or seemingly form in their absence. Often times, this can trace back to pure speculative rebalancing. Rebalancing a stretched, one-sided market is one of the most common facilitators of a move that seems light on data or theme. More common with developing motivated moves are swells with fundamental roots. Scheduled event risk can sometimes carry enough heft to forge a break and inspire a chase of capital after the dirty work is done. Yet, the real carry over comes when that data feeds into an underlying trend. Catering to something as systemic as monetary policy, risk trends or political uncertainty among other prolific currents can provide a steady feed of speculative interest as price moves to catch up to speculative expectations. 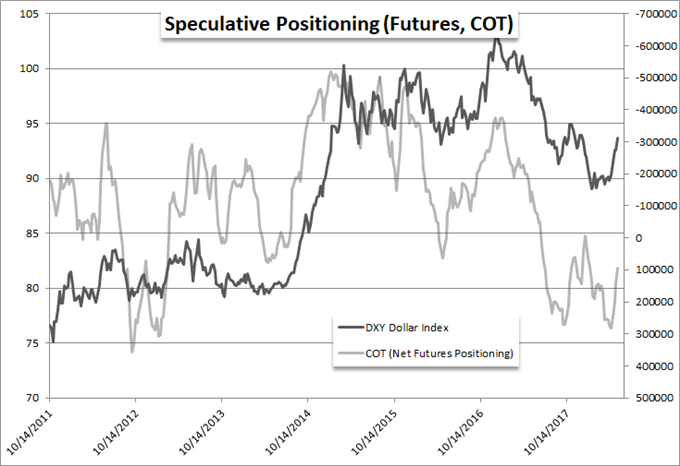 The Euro and Canadian Dollars Follow the Dollar's Lead

In the FX market, we have seen an overdue turn from the Dollar lead into a six-week upswing. After more than a year of consistent slide, DXY Index marked a crucial, high-level bearish technical break when a three-year head and shoulders neckline broke towards the beginning of this year. A move that aligned to the prevailing momentum and fit a pattern on such a large scale would often be considered a certain technical opportunity to transition to a long-term bear trend. That clearly did not happen and the turn we've seen since suggests the heavy net short position built up via futures and the discount afforded to the favorable monetary policy backdrop was a good foundation to build a reversal. Now, looking over to the Euro, it is worth evaluating whether we have the same situation - just in the opposite direction to the Dollar. The equally-weighted Euro index has sported a restrained slide for a number of weeks now, but tempo has recently picked up. Where the net short on the USD was exceptional (a five year low), the net long exposure on Euro via EURUSD was a record high until recently. Meanwhile, the 2017 advance seemed to always contradict monetary policy disadvantage and the equivalent share of growth and political risks. Another currency where the fundamentals are starting to add up is the Canadian Dollar. While it doesn't have the same speculative intensity as the Euro or Dollar, the Loonie does have fundamental winds that have shifted such that the productive rally of the past few months looks suspect. We'll see if next weeks’ BoC decision and Canada GDP provides a firmer footing. 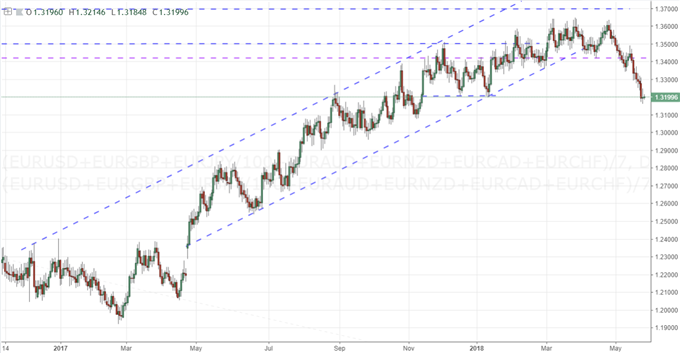 One of the most remarkable technical developments across the liquid financial markets as of late comes from equities. The US benchmarks like the Dow and S&P 500 have held stubbornly to tight ranges following their lackluster advance these past few months. In contrast some pace setters from Europe and Asia have surged over the same period. The Nikkei 225 from Japan saw a two-day retreat break a steady rising trendline support this week, the Germany DAX 30 marked its own turn but neither really measures up to the UK's FTSE 100 which ran an incredible bull trend with serious pace before we officially broke channel support Thursday. As clear and intense as these moves are, there is no collective fundamental downturn that insinuates a trend is unfolding nor is their broad risk aversion to fall back on. The same shortfall of intent registers for gold's and oil's charge this past session. The precious metal posted its biggest single-day rally since April 11 to clear nearly two weeks of range formed in a string of dojis. Yet fostering a true trend for this metal would require a systemic risk aversion that simultaneously undermines much of the traditional havens. Crude oil on the other hand was on a clear bullish path and had not long ago surpassed the mid-point of a range that has formed over the past decade. A bearish wedge break comes out of necessity, but a sustained decline amid supply-demand balance and general political risks assumes far too much. We distinguish and evaluate breaks of necessity from those of conviction in today's Quick Take video.