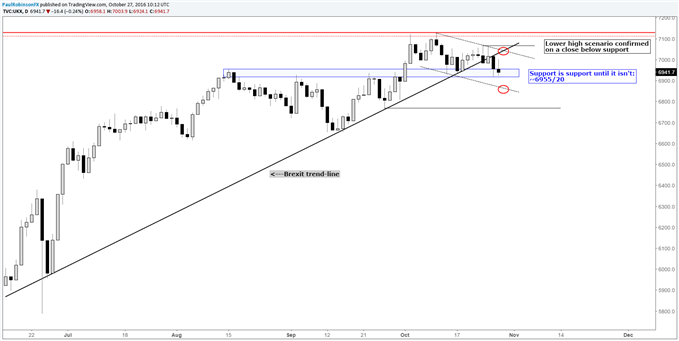 FTSE 100: Support Is Support Until It Isn’t

In Tuesday’s post, we described the FTSE 100 as ‘tiptoeing’ the June trend-line, and a second daily reversal bar in a row and a near 1% hit later the index finds itself ‘tiptoeing’ critical horizontal support. The fact the market broke the June trend-line, alone, creates potential for additional losses, but a break of both the trend-line and support running back to August will present an even clearer path for more weakness.

From Tuesday: “If the UK index should fail to hold on to the trend-line off the June lows, it should find support in the 6955/20 region where late summer peaks were created and the market held on a decline on 10/17.” This is the case, so far. Support is support until it isn’t. But without a reversal soon off the key 6955/20 zone, lower levels are likely to come into play.

We added to the above by saying the Monday reversal day was a “little concerning” (Tuesday’s second reversal day added additional concern), and that this gives “rise to the notion of a lower high developing.” A break of support would confirm the lower high scenario.

In line with our usual stance on execution; a daily close below support is required before we will sharpen our bear claws. Markets often break levels only to trade back above support or below resistance prior to the close of the bar in question, adding validity to the level as additional sellers or buyers were unable to be found beyond the key inflection point. With that said, we will hold off on moving into the bear camp until a firm close below support takes shape. It could be today; it may not happen at all.

If support breaks, we will look to the lower parallel married to the top-side trend-line off the 10/11 high as an initial level of support. Below there the next level of actual price support doesn’t arrive until the 9/27 swing low at 6769.

If support can maintain, as it is so far, and the FTSE can find bids, then resistance comes in about 100 points higher from current levels at the upper parallel and the back-side of the ‘Brexit’ trend-line. Both lines lie in the vicinity of 7040/50. Just a short distance above is the Monday/Tuesday tops at 7067.

In any event, trading in global indices has been indecisive to say the least, leaving traders with a limited scope of opportunities and trades which only work on short-term time-frames. We will continue to operate from the standpoint that this environment will persist until further notice.