Overview: As the BoE are expected to maintain current policy settings with the bank rate at 0.1% and APF at £895bln. The focus will be on the accompanying statement and projections, as well as the vote split on APF, which could see Saunders and Ramsden dissenting in light of recent hawkish commentary. Although, anything short of a 6-2 vote split could be construed as dovish relative to market pricing, prompting a knee-jerk move lower in GBP. That said, the tone of the meeting is likely to be upbeat with economic data still on the firm side, while the spread of the Delta variant looks to have peaked. However, any significant changes will likely wait until after the expiration of the furlough scheme in September.

UK economy: Since the prior meeting, economic data has largely been in line with the Bank’s forecasts with the most recent inflation figure hitting 2.5% (prior 2.1%), while the core figure rose 0.3ppts to 2.3%. A reminder, that the BoE sees inflation exceeding 3% for a temporary period, therefore while inflation has continued to track higher, the Bank is expected to stick to the script that inflation is transitory. Elsewhere, the main focal point has been on the spread of the Delta variant, which looks to be past its peak from over 50k/day to sub 30k/day. In turn, this increases the likelihood that the Bank will provide a more optimistic assessment of the economic outlook as Covid concerns recede. Keep in mind, that the RBA stuck to its plan to taper the pace of asset purchases in September despite a more concerning backdrop regarding Covid. Therefore, I am more skewed to upside risks in the Pound for the meeting. 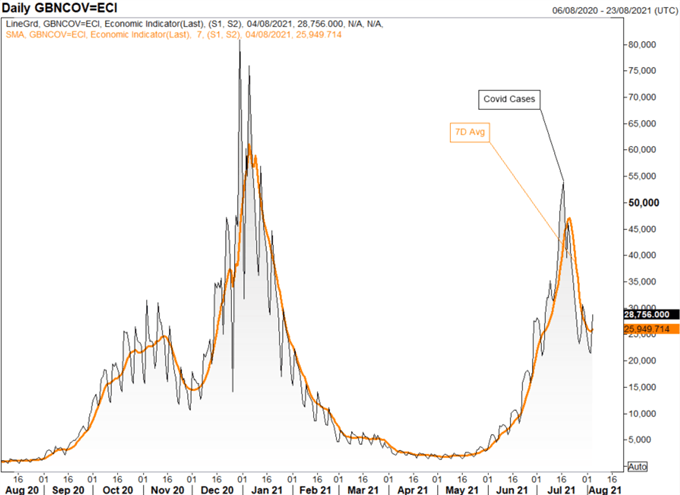 BoE Commentary: Given the recent improvement in the UK backdrop, some members have started to shift towards the hawkish side, most notably Saunders and Ramsden. In turn, while this raises the likelihood that a vote split will occur on the QE front, it is unlikely that the hawks will gather enough votes to prompt a change in current monetary policy settings.

BoE Unlikely to be as Hawkish as the MPC Shadow Committee

Once again The Times BoE shadow MPC is very much skewed to the uber hawkish side. The committee stated that the Bank should scrap the final £50bln of its planned QE and deliver a clear signal it is worried about rising inflation at the meeting. This however is very unlikely, firstly hawkish members will be unable to gather the numbers to vote to scrap the final £50bln and secondly the mantra across G10 central banks is that the spike in inflation is temporary and therefore I doubt the BoE would deviate from this viewpoint.

A focal point for BoE watchers will be an update to the Bank’s sequencing of instruments used to unwind stimulus. A reminder that the BoE’s current guidance since June 2018 states that they will not beginning unwind QE, and will continue to reinvest the proceeds of maturing gilts until the Bank Rate is at 1.5%. This had been lowered from 2% previously, while the outcome of the review is likely to see the Bank Rate 1.5% threshold lowered again. However, with discussions relatively light on this front, there is a slim chance that details will be released today and instead more likely to be announced at the November MPR.

The initial focus will be on the vote split regarding QE and with the market somewhat priced for a 6-2 vote, anything short will likely see a knee-jerk move lower in the Pound. The accompanying statement is expected to be upbeat amid robust data, while near-term inflation forecasts are likely to be upgraded, potentially around 3.5%, although, the Bank will stick to its transitory view and therefore implications should be muted. As it stands, GBP/USD ATM overnight implied volatility suggests an implied move of +/- 0.5% (or 68pips).