WTI crude oil prices fell on Monday after signs showing that OPEC+ members may not be able to reach an agreement to rein in production in a Monday meeting. This might have led to unwinding activity as oil traders have long been anticipating a 3- to 6-month delay in a planned production hike scheduled in January 2021 by the OPEC+ coalition to support oil prices amid pandemic-linked headwinds.

Besides, the Trump administration was reported to have blacklisted several Chinese companies, claiming that they are controlled by the Chinese military. Those include energy giant China National Offshore Oil Corp (CNOOC), whose share price plunged nearly 10% in Hong Kong after the news. Markets started to worry about a potential re-escalation of US-China friction during the last two months of Trump’s presidency, which could dent risk sentiment.

WTI has registered a whopping 36% gain this month through to November 25th, entering overbought territory according to the RSI indicator. The astonishing rally was primarily fueled by US election results as well as several Covid-19 vaccine breakthroughs that brightened prospects for a faster recovery in energy demand. As vaccine optimism has largely been priced in, profit-taking appeared to be ramping up in recent days.

On the macro front, Chinese NBS manufacturing PMI expanded at a faster-than-expected pace in November, marking a three-year high (chart below). This underscores a continuous improvement in manufacturing sentiment in the world’s second-largest economy, which is leading an economic recovery in the Asia-Pacific region. Read more on DailyFX economic calendar. 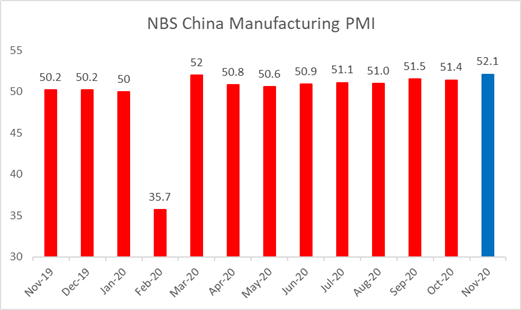 Markets saw a 0.754-million-barreldraw in US crude inventories for the week ending November 20th, following a 0.769-million-barrel rise in the week before. A deviation of oil prices from weekly inventory changes may reflect an early pricing-in of vaccine optimism. Traders appear to be willing to take a price premium in anticipation of a pickup in energy demand should the vaccines work effectively to remove travel restrictions. This may take time though.

The historic negative correlation between crude oil prices and EIA DOE inventory changes can be viewed in the chart below. The next release of the data is scheduled on December 2nd. 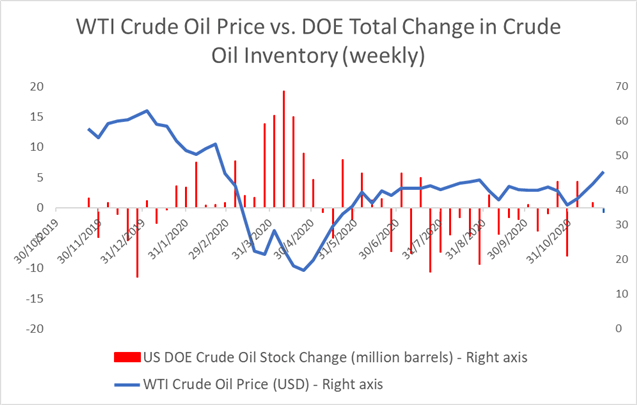 Technically, WTI has likely formed a bearish “AB=CD” pattern that usually indicates a near-term trend reversal. A pullback could lead to further consolidation towards US$ 43.40 – the 23.6% Fibonacci retracement. The RSI indicator rose into overbought territory last week and has since retraced, suggesting a technical correction could be underway.