The Australian Dollar rose slightly Friday on news that Chinese industrial profits stormed back to growth in November, although the move was probably muted by holiday trading conditions.

Profits were up by an annualized 5.4% in November, according to official Chinese data. That was a remarkable fightback from October’s 9.9% collapse. Profits were boosted by both rising industrial out and sales, the report said. However, firms still see uncertainties ahead, along with profit volatility.

Much may ultimately depend of course on the extent to which global trading relations can be normalized, notably between China and the US where an interim trade deal is apparently close to signoff. Whether this will prove to be any more than a formalized truce between the two global titans, which can lead on to a more substantive settlement, remains perhaps the main economic question for the New Year.

The Australian Dollar can act as the foreign exchange markets’ favorite liquid China-economy proxy given Australia’s close export links to the world’s second largest economy. It doesn’t seem to have done so to any great extent in the wake of these numbers, however, with AUD/USD rising only a few ticks. 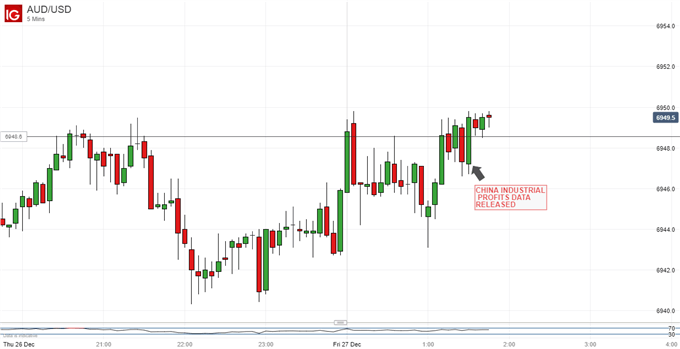 The detail that profits remain down an annualized 2.1% for the year to date may have bunted the headline’s impact, as investors are already wondering whether China’s growth targets will have to be reduced further in the years ahead, whatever may happen to trade with the US.

The Australian Dollar has risen sharply through December as optimism around at least an interim trade settlement between China and the United States has grown. 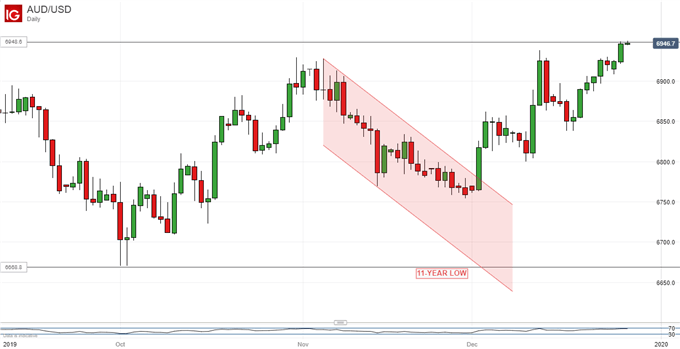 A general rise in global risk appetite, with US stocks at record highs, and the prognosis that US lending costs may not rise through 2020, are also helping the pro-cyclical Aussie’s cause.

The Australian futures market also seems much less certain that record-low Australian interest rates will be falling any further, even if there would appear to be no chance of any near- or even medium-term rise. What remains to be seen is the Reserve Bank of Australia’s attitude to a stronger currency. In the recent past it has worried about a rising Aussie as it will make the fight against already-docile inflation even harder.