GBPUSD Outlook: From a Contrarian Perspective, a Sterling Rally is Due

GBPUSD outlook: ripe for a recovery

The British Pound has fallen so far against the US Dollar since GBPUSD hit a 2019 high of 1.3382 on March 13 that a rally cannot be ruled out. As the chart below shows, the pair is clearly trending lower. However, it now looks to be forming a base around the 1.25 level and, if that holds, a short-term recovery could be due. 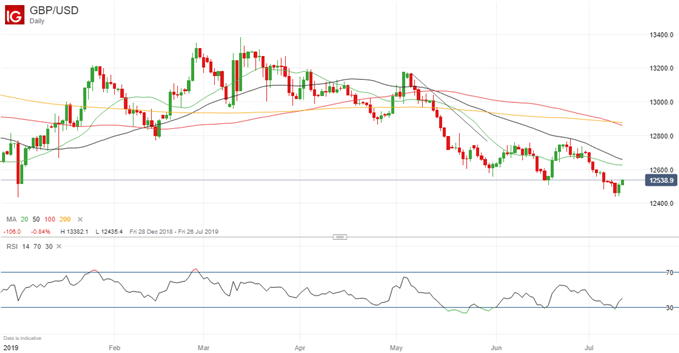 The tumble in GBPUSD has been due principally to growing fears of a no-deal Brexit if, as seems likely, former UK Foreign Secretary Boris Johnson becomes the next leader of the ruling Conservative Party and therefore the next British Prime Minister. However, it is possible that such an outcome is now fully priced in to exchange rates.

Trading GBP When a New Tory Leader Takes on Labour

GBP to fall to parity with US Dollar?

In addition, Sir Richard Branson, the founder of the Virgin group, was reported Wednesday as saying that a no-deal Brexit would cause the Pound to plummet and be worth the same as the Dollar. Contrarians argue that when sentiment is so negative a recovery is overdue.

On the other side of the GBPUSD pair, the markets are now pricing in a 26.5% chance that the Federal Open Market Committee will cut US interest rates by half a percentage point on July 31 – up sharply since the first leg Wednesday of Fed Chair Jerome Powell’s semi-annual report to Congress. If that is delivered, the US Dollar could well weaken.

That said, a couple of cautionary notes need to be mentioned. First, negative sentiment towards GBP has been much less pronounced recently when looking at a chart of Sterling since the Brexit referendum against a basket of other currencies.

Second, positioning data on retail traders using the IG platform are currently neutral. They show that 82.2% of traders are currently net-long, with the ratio of traders long to short at 4.63 to 1. In fact, traders have remained net-long since May 6, when GBPUSD traded near 1.2911; the price has moved 2.9% lower since then. The number of traders net-long is 6.2% lower than yesterday and 10.4% higher from last week, while the number of traders net-short is 1.0% lower than yesterday and 10.8% lower from last week.

At DailyFX we typically take a contrarian view to crowd sentiment, and the fact traders are net-long suggests the GBPUSD price may continue to fall. Positioning is less net-long than yesterday but more net-long from last week. The combination of current sentiment and recent changes gives us no clear GBPUSD trading bias. 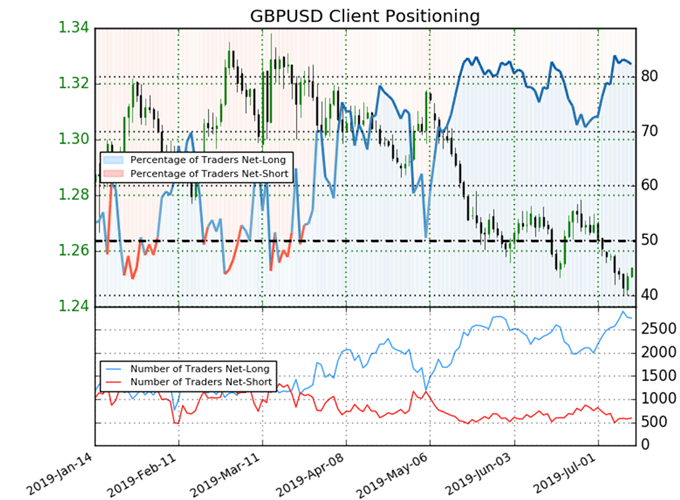 Looking for longer-term forecasts for GBP and USD? Check out the DailyFX Trading Guides.