Asia Pacific stock markets put in a mixed Friday performance with Wall Street weakness weighing. That weakness was in turn down to lackluster economic data out of both the US and Eurozone, along with disappointing corporate earnings news, notably from Nike and Tesla.

Trade talks remain front and center as they have for many weeks. Officials from China and the US will continue to meet in Washington Friday.

The Nikkei 225 was down 0.3% as its close approached, with Shanghai up by a whisker. The ASX 200 managed to make gains in the afternoon. Its mining stocks had been hit earlier by Thursday’s news that China’s Dalian port was to ban coal imports from Australia. The Hang Seng fell 0.3%.

In the foreign exchange space the US Dollar broadly held its early gains, with its New Zealand Dollar especially pressured by an announcement from its home central bank. Reserve Bank of New Zealand Deputy Governor Geoff Bascand said that new capital requirements for domestic banks could result in an interest rate cut to keep credit flowing.

NZD/USD remains below the uptrend which pertained at the start of this year, with its latest upward foray back towards that channel seeming to have been swatted by the RBNZ’s announcement. 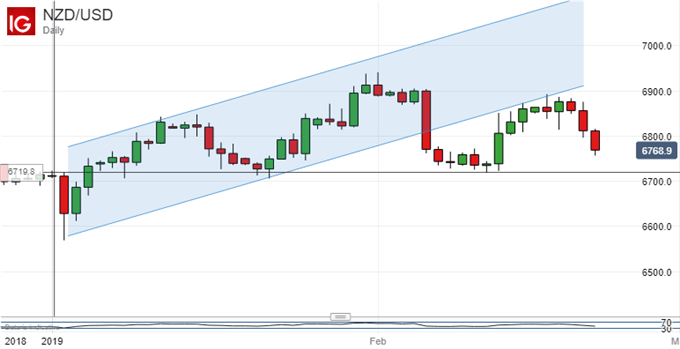 The pair seems to be headed back to its previous significant lows which were printed in the middle of this month.

Gold prices slipped back from ten-month peaks, while crude oil prices struggled with news of higher US inventories.