Asia Pacific stocks were broadly higher Wednesday thanks to yet another revival in hopes for trade rapprochement between the US and China.

President Donald Trump Tuesday proclaimed himself open to postponing the looming March 2 deadline beyond which further tariffs will be imposed on Chinese imports if an agreement can be reached shortly.

Treasury Secretary Stephen Mnuchin and Trade Representative Robert Lighthizer are currently in Beijing for talks with Vice Premier Liu He.

The Nikkei 225 was up 1.4% as its close approached, with Shanghai up 0.9% and the Hang Seng up 0.8%. Australia’s ASX 200 ran into some profit taking on the morning’s gains and was off by 0.4%, a solitary loser among regional mainboards.

The US Dollar weakened a little as trade hopes dulled investor appetite for perceived haven assets. The Australian and New Zealand Dollars got a lift. The latter gained sharply after its home central bank left interest rates alone. This had been widely expected but there had clearly been some suspicion in the markets that the Reserve Bank of New Zealand was going to strike an even more cautious tone on interest rates.

Governor Adrian Orr said afterwards that the chance of a rate cut had not increased in the past month.

NZD/USD’s recent decline has been arrested for the moment although the pair remains below the previously dominant uptrend channel which was broken to the downside last Wednesday. 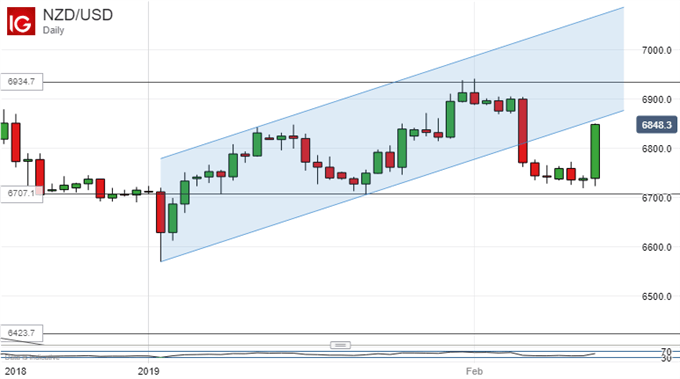 The economic day’s main remaining event will undoubtedly be the release of official US inflation figures. January’s annualized core Consumer Price Index rose is expected to have remained broadly stable at 2.1%. That data aside investors will look to a plethora of UK numbers, which include that country’s CPI. Eurozone industrial production figures are due, as is news of US mortgage-application levels.