September’s Institute for Supply Management manufacturing index crossed the wires Monday but slightly missed expectations. The ISM manufacturing index is one of the more market-moving reports because of its timeliness and inclusion of inflation and labor components. The overall index read 59.8, below the forecasted 60 and last month’s 61.3. Still, there were some areas that stood out as positives.

A more detailed look at the index revealed new orders, production, and employment grew. Comments in the report said, “demand remains strong with the New Orders Index at 60 percent or above for the 17th straight month, and inventories remain low. Consumption improved with production and employment levels continuing to expand.” Of the 18 manufacturing industries, 15 reported growth in September. The only industry that reported contraction in September was primary metals. Unsurprisingly, the metal tariffs have impacted the metal industry quite concretely. With that in mind, it is no surprise that other industries are concerned about tariffs.

The report found the decrease in September’s manufacturing index was largely attributable to trade war fears. One respondent said “the market is in a state of chaos with the latest round of tariffs. The tariffs have caused a mass rush to buy up inventories of affected products in order to minimize the long-term financial impact. This, in turn, is causing market constraints.” While different sectors are impacted to different degrees, some fears may be soothed across the board now that NAFTA has been resolved.

The resolution of NAFTA and the subsequent new ‘USMCA’ or the United States, Mexico and Canada agreement likely mitigated any Dollar weakness on Monday. Similarly, future ISM manufacturing data may be positively influenced now that North American trade is on the path to normalization. Even as the Canadian Dollar posted meaningful gains, the resolution and roughly on-target ISM figure sent the Dollar higher. 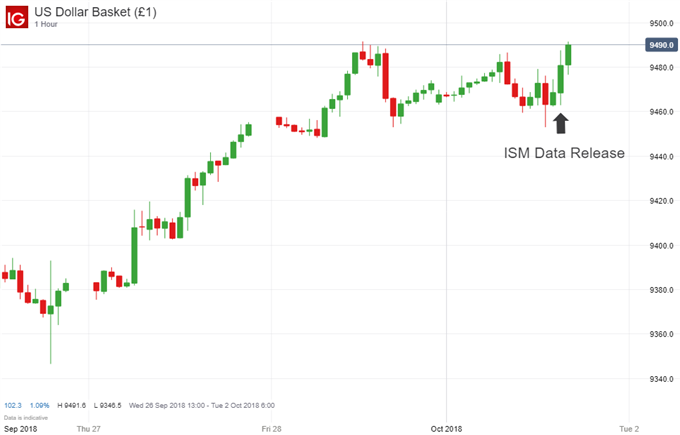 At the time of this article’s release, the US Dollar basket traded higher with a notable increase at the time of the ISM data release. The next notable piece of data for the United States economy is due Friday in change in non-farm payroll and unemployment rate. Check out our economic calendar for other events this week and next.