The Japanese Yen was steady on Monday as Bank of Japan Governor Haruhiko Kuroda stressed once more on that the central bank would stick to its ultra-accommodative monetary policy until inflation hits its 2% target.

Speaking at a quarterly meeting of BoJ regional managers, Mr. Kuroda spoke to his enduring expectation that Consumer Price Index inflation would increase speed toward that target as the output gap improved and pricing expectations rose.

He said that prices are likely to move toward 2% and that the easing program would continue towards that goal. He also said that Japan’s economy was expanding moderately, something he expects to continue.

Markets began to suspect that the withdrawal of Japan’s extraordinary monetary stimulus might soon be reined-in earlier this year when February’s CPI expansion rate rose to near three-year high of 1.5%. That was the closest it had been to the BoJ’s 2% target since mid-2015. However, price rises have decelerated sharply since, with the latest data, for May, showing a rise of only 0.7%.

There have been signs of tightening in Japan’s labor market, which may lead to increasing upward wage pressures, but for the moment, the BoJ’s target looks as elusive as it has ever been, with the BoJ’s inflation stocking credibility in huge doubt.

The contrast between a Bank of Japan still stuck with vast monetary easing, and a US Federal Reserve still committed to higher interest rates for as long as the data will permit, is extremely stark and one key reason why USD/JPY has gained so consistently since the lows of late March.

Kuroda didn’t prompt much action on Monday, as skeptical markets are used to hearing his line. 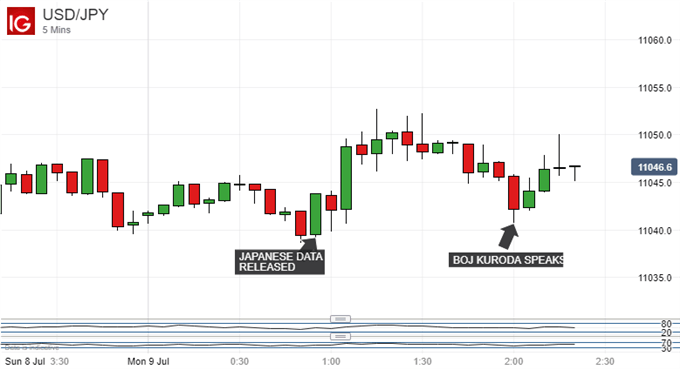 USD/JPY remains in a clear daily uptrend channel but its momentum could now be peaking. The pair’s most recent upward move failed to beat either its most recent significant peak, made on June 15, or May 21’s top of 111.42. Still, Fibonacci retracement support at 109.85 looks firm and is, in any event, some way above the upside channel’s base. 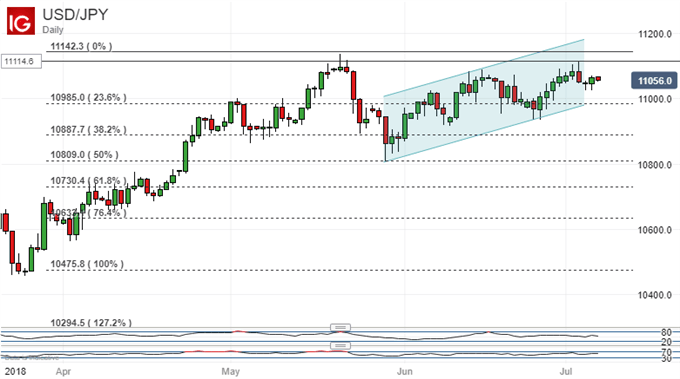 In short, Dollar bulls remain in command of this pair, but they are not exactly charging at this point. This is probably understandable given the constant drip feed of trade-spat headlines between China, the US and Europe which cannot do other than dampen market risk appetite.