The recent decline in USD/CAD appears to have stalled ahead of the 200-Day SMA (1.3145) as market participants digest the Federal Open Market Committee (FOMC) Minutes, and fresh data prints coming out of Canada may spur a rebound in the exchange rate as Retail Sales are expected to contract another 0.3% in December. 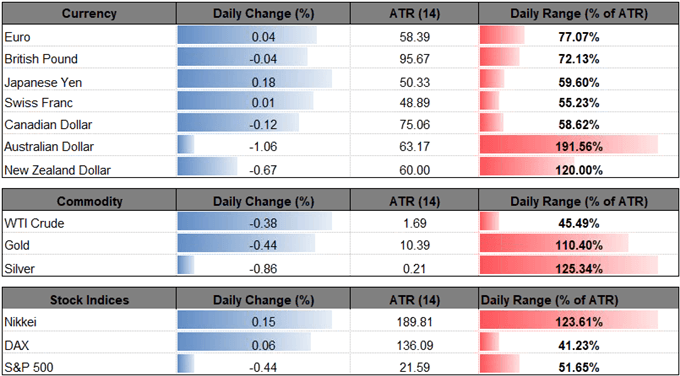 The FOMC Minutes appears to have heightening the appeal of the U.S. dollar even though the central bank drops the hawkish forward-guidance for monetary policy as several officials ‘indicated that, if the economy evolved as they expected, they would view it as appropriate to raise the target range for the federal funds rate later this year.’

In fact, the statement went onto say that ‘many participants observed that if uncertainty abated, the Committee would need to reassess the characterization of monetary policy as "patient" and might then use different statement language,’ and it seems as though the FOMC has yet to abandon the hiking-cycle as the central bank pledges to be ‘data dependent.’ It remains to be seen if the Federal Reserve will continue to adjust the forward-guidance at the next meeting in March as the ‘staff presented options for substantially slowing the decline in reserves by ending the reduction in asset holdings at some point over the latter half of this year,’ but the comments do suggest the Federal Reserve will unveil plans to taper the $50B/month in quantitative tightening (QT) over the coming months as recent data prints indicate a slowing a economy.

Updates to the U.S. Durable Goods Orders report showed demand for large-ticket items increasing 1.2% in December after expanding a revised 1.0% the month prior, while Non-Defense Capital Goods Orders excluding Aircrafts, a gauge for business investment, narrowed another 0.7% during the same period amid forecasts for a 0.2% rise. At the same time, the Philadelphia Fed Business Outlook survey tumbled to -4.1 from 17.0 in January to mark the lowest reading since 2016, and the lackluster developments may encourage a growing number of central bank officials to endorse a wait-and-see approach for monetary policy especially as St. Louis Fed President James Bullard, a 2019-voting member on the FOMC, states that the baseline case is for interest rates to stay where they are.

In turn, the shift in the Fed’s forward-guidance may keep USD/CAD under pressures as the central bank abandons the hiking-cycle, but another decline in Canada Retail Sales may fuel the dollar-loonie rebound following the FOMC Minutes as signs of slowing consumption dampen bets for a Bank of Canada (BoC) rate-hike in 2019. 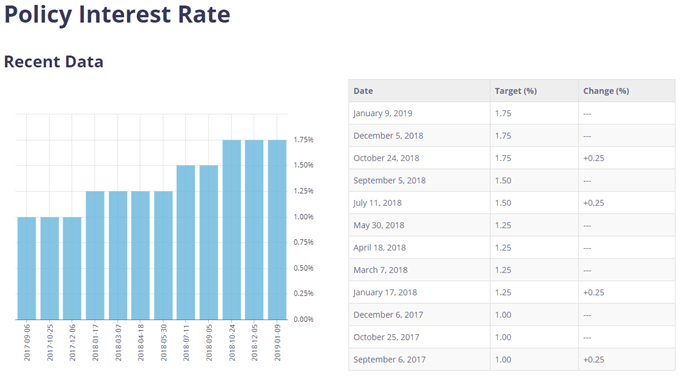 With that said, the BoC may ultimately follow a similar path to its U.S. counterpart and alter the monetary policy outlook over the coming, and Governor Stephen Poloz may strike a less-hawkish tone ahead of the next meeting on March 6 as the central bank head is scheduled to deliver a speech later today.

As a result, USD/CAD may continue to consolidate above the November-low (1.3049) as the bear-flag appears to have run its course, and the failed attempt to push below the 200-Day SMA (1.3145) raises the risk for a larger rebound as the bearish momentum appears to be abating. Recent developments in the Relative Strength Index (RSI) warns of a larger USD/CAD rebound as it breaks out of the downward trend from earlier this year, with the exchange rate at risk of exhibiting a bullish behavior as the oscillator reverses course ahead of oversold territory. Sign up and join DailyFX Currency Analyst David Song LIVE for an opportunity to discuss potential trade setups. 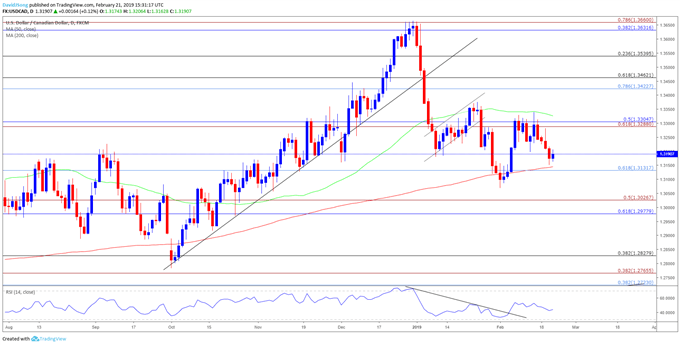