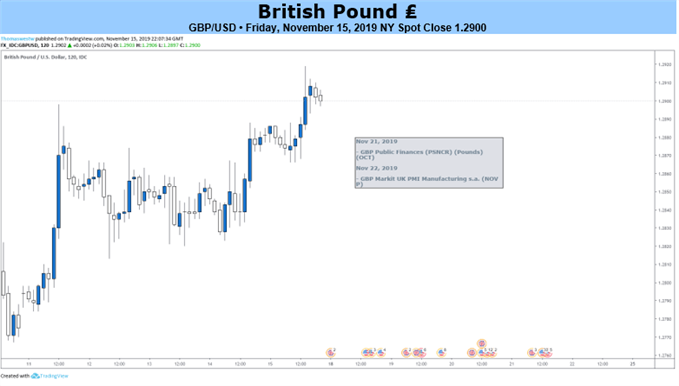 It is perhaps not surprising that British Pound price action has been wholly consumed by the upcoming UK general election and what it might mean for Brexit. The week ahead will feature the contest’s first televised debate, with incumbent Conservative Prime Minister Boris Johnson squaring off against Labour Party leader Jeremy Corbyn.

Sterling began to sink against is top counterparts in May as the odds of a no-deal Brexit surged with Mr Johnson’s ascent to the premiership, replacing the decidedly less eurosceptic Theresa May. The probability of that outcome stabilized at about 30 percent within about a month, but the currency continued to fall until recent polling pushed the prime ministers’ priced-in likelihood of victory to a commanding 88.4 percent.

The markets are less concerned with the merits of one Brexit deal relative to another than they are with having certainty. Investors can be expected to cheer any outcome that puts a forecastable framework around the UK/EU divorce. This would enable portfolios to be adjusted accordingly. A no-deal outcome is anathema precisely because planning capital allocation around it is devilishly difficult.

With that mind, all eyes will be on polling figures in the debate’s outcome. If Johnson looks likelier to triumph – giving him enough power to push a deal through Parliament – the British Pound is likely to push broadly higher. If Mr Corbyn walks away having improved his chances, a selloff is probably in the cards as the uncertainty quotient swells.