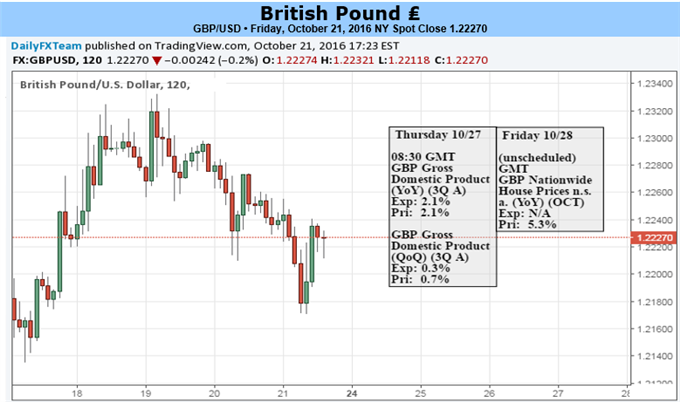 The 3Q Gross Domestic Product (GDP) reports coming out of the U.K. and U.S. along with a fresh wave of central bank rhetoric may spur increased volatility in GBP/USD, but the pair may continue to consolidate within a narrow range as British Prime Minister Theresa May increases her efforts to avoid a ‘hard Brexit.’

Bank of England (BoE) Governor Mark Carney is scheduled to appear before the House of Lords Economic Affairs Committee next week as U.K. lawmakers continue to assess the economic implications of leaving the European Union (EU), but the central bank head may largely endorse a wait-and-see approach for monetary policy as a growing number of officials sees a greater threat of overshooting the 2% target for inflation amid the sharp depreciation in the British Pound. With the U.K. economy expected to grow an annualized 2.1% during the three-months through September, the Monetary Policy Committee (MPC) may sound increasingly hawkish and stick to the sidelines throughout the remainder of the year as central bank officials warn the next quarterly inflation due out on November 3 will reflect the sharp decline in the exchange rate. In turn, the bearish sentiment surrounding the sterling may abate ahead of the BoE’s November meeting, but efforts by the new government to prevent a ‘hard Brexit’ may fail to bear fruit as the EU remains reluctant to starting negotiations until Article 50 of the Lisbon Treaty is enacted.

At the same time, economic activity in the U.S. is anticipated to pick up in the third-quarter, with the growth rate projected to increase an annualized 2.5% following the 1.4% expansion during the three-months through June, but a marked slowdown in the core Personal Consumption Expenditure (PCE), the Federal Reserve’s preferred gauge for inflation, may drag on interest-rate expectations as central bank officials continue to warn ‘survey-based measures of longer-run inflation expectations were little changed, on balance, while market-based measures of inflation compensation remained low.’ Even though the Federal Open Market Committee (FOMC) appears to be following a similar path to 2015 and talks up expectations for a December rate-hike, New York Fed President William Dudley, St. Louis Fed President James Bullard, Chicago Fed President Charles Evans, Governor Jerome Powell and Atlanta Fed President Dennis Lockhart may continue to endorse a ‘gradual’ path in normalize monetary policy as the central bank remains cautious in removing the accommodative policy stance. With that said, dovish remarks from the slew of Fed officials may undermine the near-term strength in the greenback especially as the central bank continues to reduce its long-run interest rate forecast in 2016. 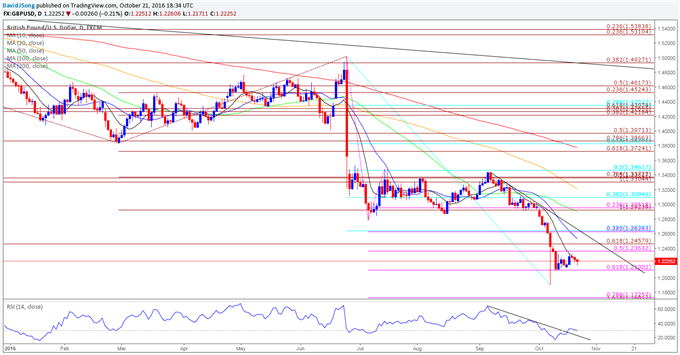 The broader outlook for GBP/USD remains tilted to the downside as it preserves the bearish trend carried over from the previous month, but the range-bound price action following the British Pound ‘flash crash’ may persist ahead of the key U.S./U.K. event risks as market participants weigh the diverging paths for monetary policy. Nevertheless, the recent development in the Relative Strength Index (RSI) suggests a larger recovery could be at hand as the oscillator breaks out of the near-term bearish formation and climbs out of oversold territory, and a break/close above 1.2360 (50% expansion) in the exchange rate may generate a larger correction as the weakness in the pound-dollar appears to be exhausted.