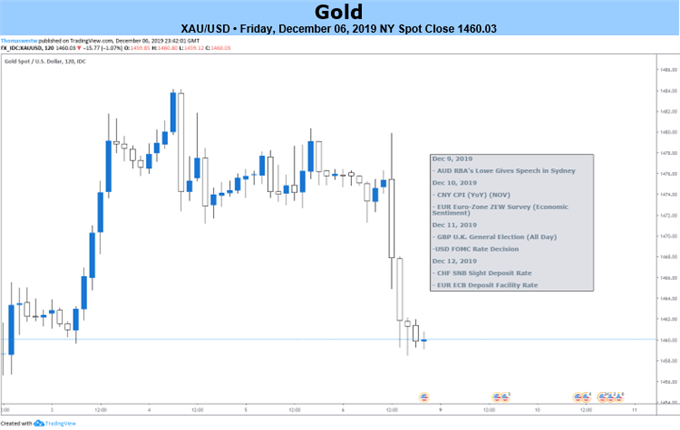 Gold prices may fall in the week ahead if thawing US-China trade war relations cool 2020 Fed rate cut bets amid expectations of strong economic growth for Q4 out of the largest economy in the world. The avoidance of a government shutdown may also pressure anti-fiat hedges if the prospect of weaker growth from furloughed workers is reduced – thereby reducing the need for additional liquidity provisions.

Since September 5, Gold Prices Have Fallen a Little Over Five Percent 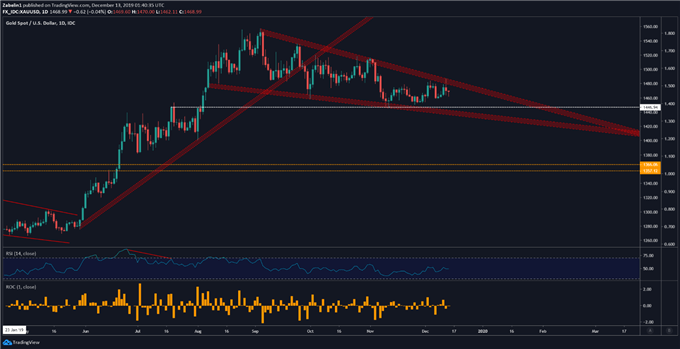 On Thursday, the US and China reached a “phase 1” deal in principle. Officials are expected to delay the much-dreaded December 15 tariff hike which would see Washington impose over $160 billion worth of levies against Chinese-imported goods. Beijing also announced on the same day that it intends on purchasing $50 billion worth of US agricultural goods.

The latter is a crucial factor for President Donald Trump who is concerned about appeasing his core constituency ahead of the 2020 election. If relations between Beijing and Washington continue to improve – or at least, not get worse – it may cool 2020 Fed easing expectations and sap upside pressure in gold prices. This dynamic may be amplified if better-than-expected US data also alleviates the urgency for Fed rate cuts.

However, it should be noted that major issues pertaining to intellectual property rights have still not been addressed, and other phases in the trade accord still need to be ratified. Given the time horizon between the initiation of trade talks, damage done to the global economy in the interim and progress made up until now, traders should be wary about expressing irrational exuberance considering the difficulties that lie ahead.

As a non-interest-bearing asset, the appeal of owning gold in a low-interest rate environment is magnified. Therefore, monitoring crucial economic statistics – like GDP data – is key because of the influence it may have on future easing expectations from the Fed. The third estimate for growth in Q3 on a quarter-on-quarter annualized basis is expected to show a 2.1 percent figure, unchanged from the prior period.

The year-on-year Personal Core Expenditure (PCE) core deflator is anticipated to show a 1.5 percent reading, slightly less than the prior 1.6 percent print. Considering the Fed’s strong emphasis on achieving its 2 percent inflation target, a weaker reading could reduce some of XAU/USD’s losses if it boosts Fed rate cut bets. Personal income for November is expected to rise 0.3 percent, an increase from the prior 0.0 percent figure.

Will There be Another Government Shutdown?

Gold prices may also take a hit it if another government shutdown is avoided and government workers are not furloughed. XAU/USD rose a little over three percent last year during the longest US governmental shutdown on record, starting on December 22, 2018 through January 25, 2019. On the other hand, if Congress is not able to unify around a budget and another shutdown ensues, gold prices may trim some of their losses. 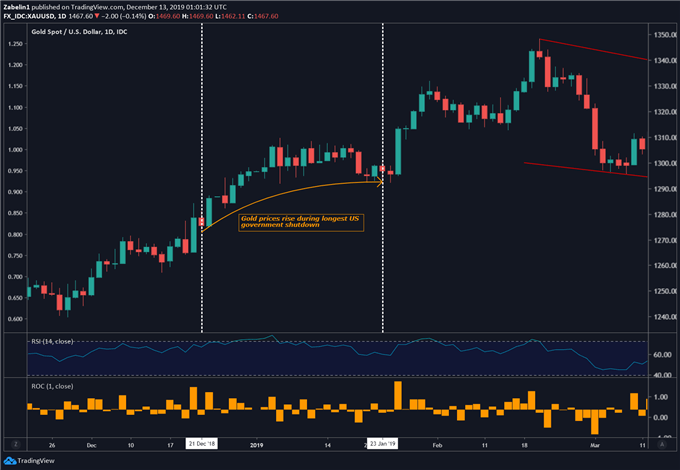